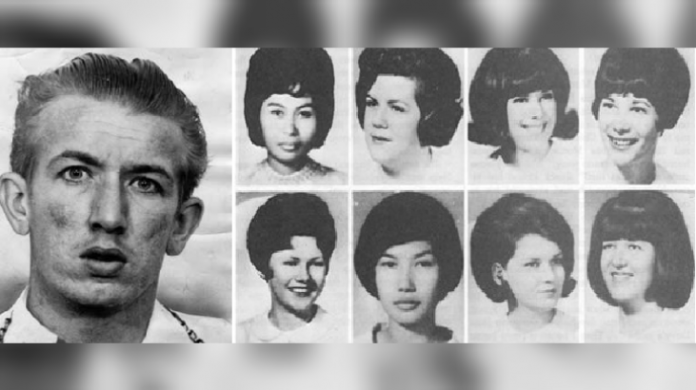 On the night of July 14, 1966, eight student nurses are brutally murdered by Richard Speck at their group residence in Chicago, Illinois. Speck threatened the women with both a gun and a knife, tying each of them up while robbing their townhouse.

Over the next several hours, Speck stabbed and strangled each of the young women throughout various rooms of the place. One young woman, Corazon Amurao, managed to escape with her life by hiding under a bed; Speck had lost count of his victims.

Richard Speck was an alcoholic and a petty criminal with over 20 arrests on his record by the age of 25. He had “Born to Raise Hell” tattooed on his forearm and periodically worked on cargo boats traveling the Great Lakes. On the night of July 13, after drinking heavily at several Chicago bars, Speck broke into the townhouse for student nurses of the South Chicago Community Hospital.

Speck then used his gun to force three nurses into a bedroom, where he found three more women. Using nautical knots, he then tied the women’s hands and feet with strips torn from bedsheets. By midnight, three more nurses had come home only to be tied up as well. Speck assured the women that he was only going to rob them.

After stealing from the women, he took them into separate rooms, killing them one by one. The remaining women heard only muffled screams from their roommates. Amurao, who was hiding under her bed, waited until 6 a.m. the following day before leaving her hiding place. She then crawled out onto a second-story ledge and screamed for help. Police responding to the cries obtained a detailed description of Speck from Amurao; the sketch was placed on the front page of every local newspaper the next morning. Speck, who was hiding out at a dollar-a-night hotel, slashed his right wrist and left elbow in a suicide attempt on July 16.

Speck was arrested the next day at the Cook County Hospital. With Amurao’s identification and his fingerprints left at the scene, Speck was convicted and sentenced to death. However, in 1972, when the Supreme Court invalidated the death penalty law under which he was sentenced, Speck was re-sentenced to 400 years in prison. He died in prison of a heart attack on December 5, 1991.

Speck was born in Kirkwood, Ill., on the day before the Japanese bombed Pearl Harbor, Dec. 6, 1941, one of eight children. When the boy was 6, his father died, and his mother quickly remarried and moved to Texas. Tormented by his abusive stepfather, Speck turned to crime, booze and drugs. He was arrested for the first time at 14.

His crimes escalated as he aged to burglary, assault, and drunk and disorderly conduct. His relationship with women, including a wife and mother-in-law, were marked by violence.

By the time he left Dallas in the spring of 1966 and headed back to Illinois, he had at least 40 arrests on his record. One of his behind-bars hobbies was having other inmates ink tattoos on his body. One of these works of art led to his capture. It was on his left forearm and read: “Born to Raise Hell.”

Despite a massive manhunt and excellent clues to identify the killer, Speck remained at liberty for days.

Then early on July 17, police were called to a skid-row flophouse to bring a tall young man to the hospital. He had tried to kill himself, slashing his arms with a knife.

On April 15, 1967, a jury took just 49 minutes to find Speck guilty and recommend the electric chair. His death sentence became 400 to 1,200 years in prison in 1972 after the U.S. Supreme Court declared capital punishment unconstitutional. He lasted less than 20 years, dying of a heart attack a day before his birthday in 1991.

Speck never expressed remorse. In a homemade prison video from 1988, which aired on A&E five years after his death, Speck appears with female breasts from bootleg hormone treatments, snorting cocaine off another inmate’s leg. He seemed to be having a grand time in custody.

In the video, an off-camera interviewer asked, “Did you kill them?” Speck said, “Sure I did.” When asked why, Speck said, “It just wasn’t their night.”