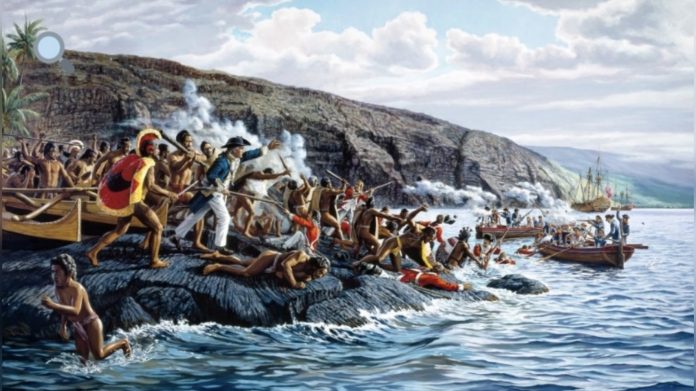 On 14 February 1779, English explorer Captain James Cook attempted to kidnap Kalaniʻōpuʻu, the ruling chief (aliʻi nui) of the island of Hawaii. The decision to hold him in exchange for a stolen longboat was the fatal error of Cook’s final voyage, and led to his death at Kealakekua Bay.

On the morning of14 February 1779, Cook and his men launched from Resolution along with a company of armed marines. They went directly to the ruling chief’s enclosure where Kalaniʻōpuʻu was still sleeping. They woke him and directed him, urgently but without threat, to come with them.

As Cook and his men marched the ruler out of the royal enclosure, Cook himself held the hands of the elder chief as they walked away from the town towards the beach. Kalaniʻōpuʻu’s favorite wife, Kānekapōlei, saw them as they were leaving and yelled after her husband but he ignored her and did not stop. She called to the other chiefs and the townspeople to alert them to the departure of her husband.

Two chiefs, Kalaimanokahoʻowaha the young son of the former ruler, Keaweʻopala, and Nuaa, the king’s personal attendant followed the group to the beach with the king’s wife behind them pleading along the way for the aliʻi nui to stop and come back

By the time they got to the beach, Kalaniʻōpuʻu’s two youngest sons, who had been following their father believing they were being invited to visit the ship again with the ruler, began to climb into the boats waiting at the shore.

Kānekapōlei shouted to them to get out of the boat and pleaded with her husband to stop. The ruler then realized that Cook and his men were not asking him to visit the ship, but were attempting to abduct him. At this point he stopped and sat down.

Cook’s men were confronted on the beach by an elderly kahuna who approached them holding a coconut and chanting. They yelled at the priest to go away, but he kept approaching them while singing the mele.

When Cook and his men looked away from the old kahuna, they saw that the beach was now filled with thousands of Native Hawaiians. Cook told Kalaniʻōpuʻu to get up but the ruler refused. As the townspeople began to gather around them, Cook and his men began to back away from the hostile crowd and raise their guns. The two chiefs and Kānekapōlei shielded the aliʻi nui as Cook tried to get him to his feet.

Kanaʻina angrily approached Cook, who reacted by striking the chief with the broad (flat) side of his sword. Kanaʻina jumped at Cook and grabbed him. Some accounts state that Kanaʻina did not intend to hit Cook while other descriptions say the chief deliberately struck the navigator across the head with his leiomano. Either way, Kanaʻina pushed Cook, who fell to the sand.

As Cook attempted to get up, Nuaa lunged at him and fatally stabbed him in the chest with a metal dagger, obtained by trade from Cook’s ship during the same visit. Cook fell with his face in the water. This caused a violent, close-quarters melee between the townspeople and Cook’s men.

Four of the Royal Marines (Corporal James Thomas and Privates Theophilus Hinks, Thomas Fachett, and John Allen) were killed and two were wounded. The remaining sailors and marines, heavily outnumbered, continued to fire as they retreated to their small boat and rowed back to their ship, killing several of the angered people on the beach, including possibly High Chief Kanaʻina. Cook’s ships did not leave Kealakekua Bay until 22 February. They remained for another week to continue repair of the mast and collect better-quality drinking water.

A young William Bligh, the future captain of HMS Bounty, later claimed to have been watching with a spyglass from Resolution as Cook’s body was dragged up the hill to the town by the Native Hawaiians, where it was torn to pieces by them.