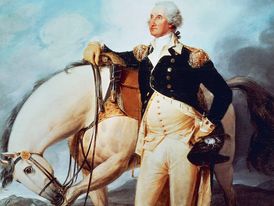 At 10:00 p.m. on December 14, 1799, George Washington died at his Mt. Vernon home after five decades of service to his country. His last words reportedly were: “I feel myself going. I thank you for your attentions; but I pray you to take no more trouble about me. Let me go off quietly. I cannot last long.” Washington was sixty-seven years old.

After the Revolutionary War, Washington hoped to live as a gentleman farmer in Virginia, yet he repeatedly deferred this wish in order to serve his country. Called to the presidency in 1789, he told the citizens of Alexandria, Virginia, on April 16 of that year, “my love of retirement is so great, that no earthly consideration, short of a conviction of duty, could have prevailed upon me to depart from my resolution ‘never more to take any share in transactions of a public nature.’” Unanimously re-elected to the presidency, he completed a second term and retired in 1796. As late as 1798, however, when war with France seemed imminent, Washington again accepted command of American forces.

The astounding array of places named for the first president and the memorials celebrating his life attest to Washington’s honored position in the national memory. Among these places are the United States capital, Washington, D.C., its Washington Monument, and Washington State. Commemorative artwork celebrating Washington and his accomplishments was a common feature of nineteenth- and early twentieth-century homes. The many turn-of-the century postcard views of portraits, Washington’s plantation, and even his military quarters further evidence public fascination with the life of George Washington.