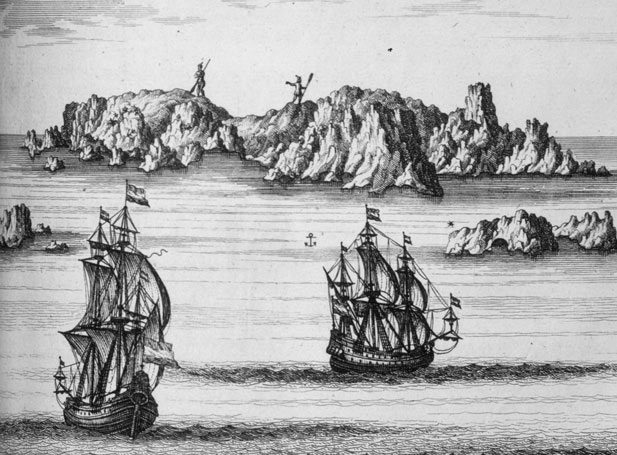 On this day in 1642, Dutch explorer and merchant Abel Tasman sighted South Island, New Zealand, and later, mistaking the strait north of the island for a bay, believed he had found the west coast of a hypothetical southern continent.

He was on an expedition to discover a ‘Great South Land’ that was believed to be rich in minerals. In 1642, while searching for this continent, Tasman sighted a ‘large high-lying land’ off the West Coast of the South Island.

Abel Tasman annexed the country for Holland under the name of ‘Staten Landt’ (later changed to ‘New Zealand’ by Dutch mapmakers). Sailing up the country’s West Coast, Tasman’s first contact with Māori was at the top of the South Island in what is now called Golden Bay. Two waka (canoes) full of Māori men sighted Tasman’s boat. Tasman sent out his men in a small boat, but various misunderstandings saw it rammed by one of the waka. In the resulting fight, four of Tasman’s men were killed.

Tasman never set foot on New Zealand, and after sailing up the West Coast, went on to some Pacific Islands, and then back to Batavia (now Jakarta) in the Dutch East Indies (now Indonesia). His mission to New Zealand was considered unsuccessful by his employers, the Dutch East India Company, Tasman having found ‘no treasures or matters of great profit’.