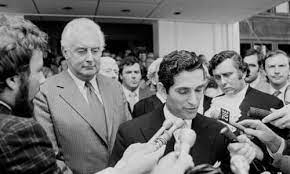 This is the letter that Governor-General Sir John Kerr handed to Gough Whitlam on 11 November 1975, terminating his appointment as Prime Minister of Australia. Written on the Governor-General’s letterhead, Kerr’s letter explains that (under section 64 of the Constitution) he has the power to ‘determine’ the appointment of the Australian head of government and of his ministers. Kerr refers to previous discussions with Whitlam, in which Whitlam had stated that he would never resign or advise an election or double dissolution—and that the only way the Governor-General could obtain such an election would be by dismissing him and his ministers. Because the prime minister has ‘persisted in this attitude’, Kerr has decided to proceed with dismissal.
This letter is the key document in a dramatic event in Australian political history—the dismissal of Prime Minister Gough Whitlam. This letter is the formal document of dismissal.
On 11 November 1975, Whitlam had gone to Government House in Canberra to meet with the Governor-General, Sir John Kerr. Whitlam had intended to discuss a recommendation he had planned to put to the Governor-General: that a Senate half-election be called.
Instead of this, at 1.00 pm, Kerr handed this dismissal letter to Whitlam. In his letter, Kerr argues that section 64 of the Australian Constitution gave him the legal power to determine (decide the fate of) the commission of government ministers, including the prime minister. (Specifically, section 64 states that ‘the Governor-General may appoint officers to administer such departments of State of the Commonwealth as the Governor-General in Council may establish’.) Kerr later stated that he had sought advice from the Chief Justice of the High Court of Australia, Sir Garfield Barwick—and that this advice was a major factor in his decision. On 10 November Barwick had advised Kerr (in writing) that the Governor-General has the authority to withdraw a prime minister’s commission. Not all experts in constitutional law agree, however. Some have expressed doubt that the reserve power of section 64 does in fact enable a Governor-General to dismiss a government that has a majority in the House of Representatives. As proposed in his letter to Whitlam, Kerr commissioned Malcolm Fraser as caretaker prime minister. Fraser immediately took steps to use the opposition Liberal–Country Party Coalition’s numbers in the Senate to pass ‘supply’ (the budget bills)—thus breaking the deadlock and ending the financial crisis. Both houses of parliament were simultaneously dissolved, and a general election was called. In the election, held on 13 December 1975, the Coalition secured a very large majority. The termination of Whitlam’s commission as prime minister was the culmination of events that began in October 1975. The refusal of the Senate to vote on the government’s budget bills had resulted in a deadlock between it and the House of Representatives. The Coalition ’had the numbers’ to block supply in the Senate because it had the support of two non-Labor senators. Liberal and Country Party premiers in New South Wales and Queensland had appointed these non-Labor Senators to fill vacant Labor seats—which was a significant break with tradition.