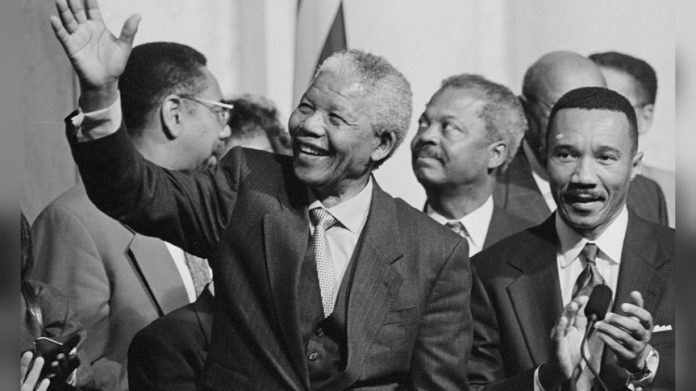 On 10 May 1994, Nelson Mandela, at the age of 77, was inaugurated as South Africa’s first black president and F.W de Klerk became Mandela’s first deputy. Although the ANC – African National Congresss gained a majority vote, they formed the Government of National Unity (GNU), headed by Mandela.

In his inaugural address, Mandela, who spent 27 years of his life as a political prisoner of the South African government, declared that “the time for the healing of the wounds has come.” Two weeks earlier, more than 22 million South Africans had turned out to cast ballots in the country’s first-ever multiracial parliamentary elections. An overwhelming majority chose Mandela and his African National Congress (ANC) party to lead the country.

Mandela, born in 1918, was the son of the chief of the Xhosa-speaking Tembu people. Instead of succeeding his father as chief, Mandela went to university and became a lawyer.

In 1944, he joined the African National Congress (ANC), a Black political organization dedicated to winning rights for the Black majority in white-ruled South Africa. In 1948, the racist National Party came to power, and apartheid  South Africa’s institutionalized system of white supremacy and racial segregation became official government policy. With the loss of Black rights under apartheid, black enrollment in the ANC rapidly grew. Mandela became one of the ANC’s leaders and in 1952 was made deputy national president of the ANC. He organized nonviolent strikes, boycotts, marches and other acts of civil disobedience.

The presidency of Nelson Mandela began on 10 May 1994, when Nelson Mandela, an anti- apartheid activist, leader of Umukhonto We Sizwe, lawyer, and former political prisoner, was inaugurated as President of South Africa, and ended on 14 June 1999.

He was the first non-White head of state in South African history, as well as the first to take office following the dismantling of the apartheid system and the introduction of full, multiracial democracy. Mandela was also the oldest head of state in South Africa’s history, taking office at the age of seventy-five. His age was taken into consideration as part of his decision to not seek re-election in 1999.