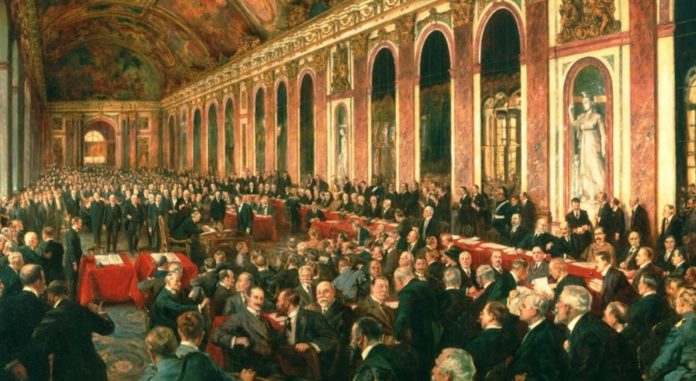 On 10 Jan 1920 the controversial Treaty of Versailles — which established the terms for peace at the end of World War I — went into effect.

The Treaty of Versailles was the primary treaty produced by the Paris Peace Conference at the end of World War I. It was signed on June 28, 1919, by the Allied and associated powers and by Germany in the Hall of Mirrors in the Palace of Versailles and went into effect on January 10, 1920.

A brief treatment of the Treaty of Versailles follows. For full treatment, see international relations: Peacemaking, 1919–22.

The short term effects of the Treaty of Versailles is that Germany had to accept guilt for starting the war, was forced to pay Allies reparations, lost land, and had to reduce the size of it military. The League of Nations was created to settle disputes between countries before military conflict.

The treaty was lengthy, and ultimately did not satisfy any nation. The Versailles Treaty forced Germany to give up territory to Belgium, Czechoslovakia and Poland, return Alsace and Lorraine to France and cede all of its overseas colonies in China, Pacific and Africa to the Allied nations.

When the German government asked U.S. Pres. Woodrow Wilson to arrange a general armistice in October 1918, it declared that it accepted the Fourteen Points that he had formulated and presented to the U.S. Congress in January 1918 as the basis for a just peace. However, the Allies demanded “compensation by Germany for all damage done to the civilian population of the Allies and their property by the aggression of Germany by land, by sea and from the air.” Further, the nine points covering new territorial consignments were complicated by the secret treaties that England, France, and Italy had made with Greece, Romania, and each other during the last years of the war.

The treaty was drafted in the spring of 1919 during the Paris Peace Conference, which was conducted even as the world was in the grip of the influenza pandemic of 1918–19. The conference was dominated by the national leaders known as the “Big Four”—David Lloyd George, the prime minister of the United Kingdom; Georges Clemenceau, the prime minister of France; Woodrow Wilson, the president of the United States; and Vittorio Orlando, the prime minister of Italy. The first three in particular made the important decisions. None of the defeated nations had any say in shaping the treaty, and even the associated Allied powers played only a minor role. The German delegates were presented with a fait accompli. They were shocked at the severity of the terms and protested the contradictions between the assurances made when the armistice was negotiated and the actual treaty. Accepting the “war guilt” clause and the reparation terms was especially odious to them.

The population and territory of Germany was reduced by about 10 percent by the treaty. In the west, Alsace and Lorraine were returned to France, and the Saarland was placed under the supervision of the League of Nations until 1935. In the north, three small areas were given to Belgium, and, after a plebiscite in Schleswig, northern Schleswig was returned to Denmark. In the east, Poland was resurrected, given most of formerly German West Prussia and Poznań (Posen), given a “corridor” to the Baltic Sea (which separated East Prussia from the rest of Germany), and given part of Upper Silesia after a plebiscite. Gdańsk (Danzig) was declared a free city. All Germany’s overseas colonies in China, in the Pacific, and in Africa were taken over by Britain, France, Japan, and other Allied nations (see mandate).

The Treaty of Versailles is one of the most controversial armistice treaties in history. The treaty’s so-called “war guilt” clause forced Germany and other Central Powers to take all the blame for World War I. This meant a loss of territories, reduction in military forces, and reparation payments to Allied powers.