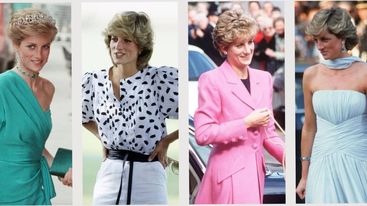 Diana was born at Park House, the home that her parents rented on Queen Elizabeth II’s estate at Sandringham and where Diana’s childhood playmates were the queen’s younger sons, Prince Andrew and Prince Edward. Diana was the third child and youngest daughter of parents who belonged to the British nobility.

Diana was the former consort (1981–96) of Charles, prince of Wales the mother of the heir second in line to the British throne, Prince William, Duke of Cambridge (born 1982); and one of the foremost celebrities of her day.

Diana renewed her contacts with the royal family, and her friendship with Charles grew in 1980. On February 24, 1981, their engagement was announced, and her beauty and shy demeanour—which earned her the nickname “Shy Di”—made her an instant sensation with the media and the public.

Princess Diana and Prince Charles married in St.Paul’s Cathedral on July 29, 1981, in a globally televised ceremony watched by an audience numbering in the hundreds of millions. Their first child, Prince William Arthur Philip Louis of Wales, was born on June 21, 1982, and their second, Prince Henry ( Harry) Albert David, on September 15, 1984.

Diana struggled with severe postnatal depression, low self-esteem, eating disorders, and the mounting strain of being constantly pursued by both the official media royal-watchers and the tabloid press, particularly the paparazzi.

The marital breakdown became increasingly apparent amid mutual recriminations, tell-all biographies, and admissions of infidelity on both sides, and the couple formally separated in 1992. Diana presented her side in Andrew Morton’s controversial book Diana: Her True Story (1992) and in an unusually candid television interview in 1995. After prolonged negotiations that left Diana with a substantial financial settlement but without the title Her Royal Highness, the couple’s divorce became final on August 28, 1996.

Long one of the most-photographed women in the world, Diana’s unprecedented popularity both in Britain and abroad continued after her divorce. Although she used that celebrity to great effect in promoting her charitable work, the media (in particular the paparazzi) were often intrusive. It was while attempting to evade pursuing journalists that Diana was killed, along with her companion, Dodi Fayed, and their driver, Henri Paul, in an automobile accident in a tunnel under the streets of Paris in 1997.