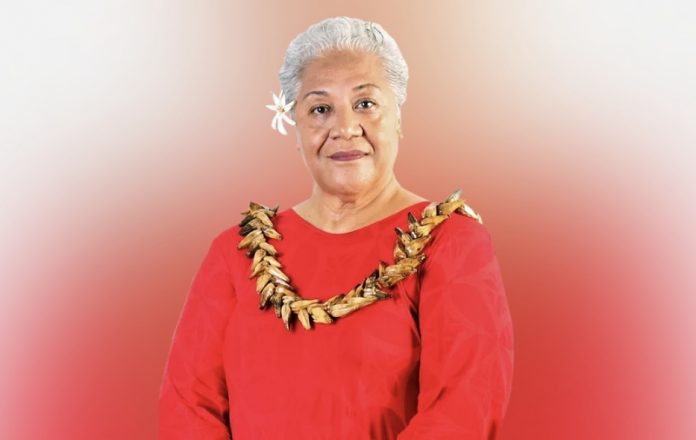 29 April 1957 – Samoa’s current and first woman Prime Minister, Honorable Fiame Naomi Mataafa was born Naomi Mataʻafa on 29 April 1957 to high chief Fiamē Mataʻafa Faumuina Mulinuʻu II who later served as Samoa’s first Prime Minister and his wife, Masiofo Laulu Fetauimalemau Mataʻafa who had also served as a Member of Parliament from Lotofaga from 1975 to 1976, and again from 1979 to 1982.

In 2017, Fiame was awarded the Stars of Oceania Individual’s Award. In December 2018 she was awarded an honorary Doctor of Letters by the University of the South Pacific. As Minister of Natural Resources and Environment she was awarded the Ocean Stewardship Award in 2017 by Conservation International and the Ocean Health Index for her role in ushering in Samoa’s Ocean Strategy.

In December 2021 she was listed on the BBC’s list of 100 inspiring and influential women from around the world for 2021.

Hon Fiame Naomi Mataafa has broken many barriers in women’s leadership, including the first woman to serve as Samoa’s head of government and the first to not be a member of the Human Rights Protection Party (HRPP) since 1982.

A member of the HRPP until 2020, she was the first woman appointed to Cabinet in Samoa’s history. Mata’afa was the Minister of Education for 15 years from 1991 to 2006, driving major reforms in the education sector during that period, under the governments of Prime Ministers Tofilau Eti Alesana and Tuila’epa Sa’ilele Malielegaoi.

Fiame moved on in 2006 to become Minister of Women from 2006 to 2011 and Minister of Justice from 2011 to 2016. For both of those portfolios, trailblazing the way as the first woman to have held those Cabinet positions.

Hon Fiame then served as Samoa’s first female Deputy Prime Minister and deputy leader of the HRPP from 2016 to 2020, resigning in opposition to the controversial Land and Titles  Bills on September 11, 2020 – seven months before the 2021 General Elections of 9 April 2021, where she was un-opposed. Joining the newly founded FAST party, Fiame was unanimously elected its leader in March 2021.

Mataʻafa won a majority in the 2021 election, however, did not take up Office as Prime Minister until the post-election 2021 Samoan constitutional crisis was resolved by Samoa’s Court of Appeal on 23 July 202 – with a retrospective ruling that declared Fiame Naomi Mataʻafa had been Prime Minister since 24 May 2021.