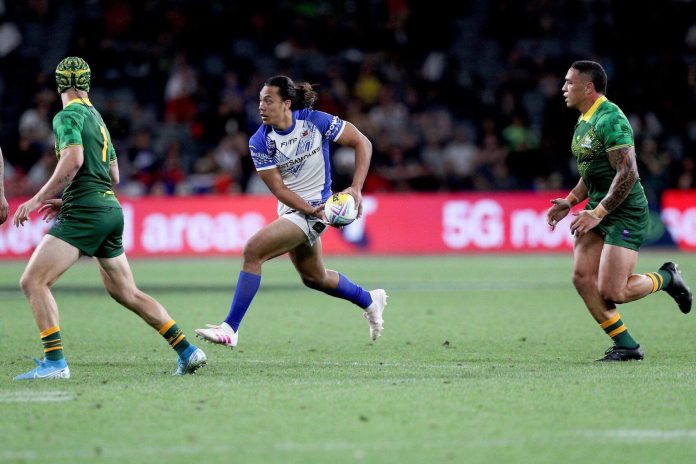 Toa Samoa’s World Cup 9’s campaign has come to an end at the hands of Australia 25-8.

Australia drew first blood after Dean Blore shot out the defensive line leaving a gaping whole for Kayla Ponga to slice through a try.

Being down 7-0 Samoa managed to get their hands on the ball and worked their way to prime attacking position.

Samoa came out of the half firing on all cylinders closing the gap to 11-8. After Mitchell Moses kicked the ball out on the full, Samoa were on the attack. Marion Seve scored his second try of the match off quick simple hands by Jarome Luai and Tim Lafai.

After Samoa’s second try, Australia were under the pump. They turned to their speedster Addo-Carr to chase a long 50 metre kick. Addo-Carr gathers the kick and Australia spread the ball to the midfield where they find some tired Samoans.

AJ Brunson capatilizes and seals the victory for Australia with a bonus try.

Samoa ends their World 9s campaign on a high with all players having put on passionate performances through the pool matches, succumbing only to the World’s top rugby league nation.