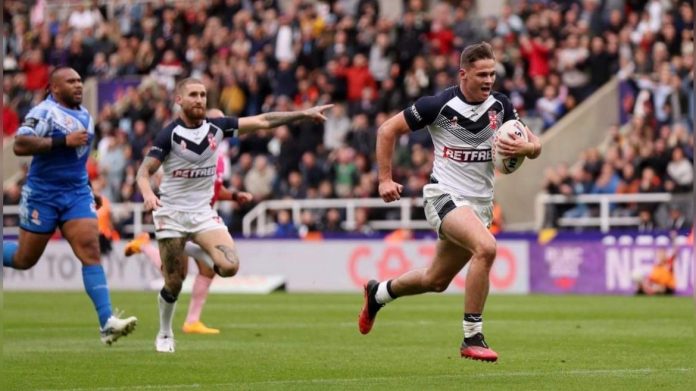 Toa Samoa have been humbled by a 60-6 thrashing at the hands of England.

This Samoa team has been talked about for over a year now however, the squad of superstars coming off briliant performances for their NRL clubs, have fallen well short of the mark in their first match of the Rugby League World Cup against England.

The host nation took an early 2-point lead before scoring three tries in the space of 10 minutes.

Playing for England, Newcastle Knights winger Dominic Young burned through the Samoan defence twice in the first half to notch himself a double. Jack Welsby also crossed the tryline to make it 18-0.

Jack Welsby was playing so well he even set up Samoa’s only try of the match, when he threw an intercept to Izack Tago.

The Penrith Panther NRL Championship centre ran the length of the field to score a try that brought hope back for global Samoan fans and looked to have awoken the men in blue.

Toa Samoa came close to crossing the line again before halftime but they denied themselves with a string of ball handling errors and poor communication near the tryline.

At halftime, an 18-6 scoreline was a bit of a relief given England’s dominance of the first-half stat sheet.

Toa Samoa are the only team to not have played a warm up match before the Rugby League World Cup and it showed. Their match fitness was poor, they looked to always be on the back peddle and there were no combinations clicking into place.

England stretched their lead out to 18 points but Samoa’s efforts to keep the scoreline close ended when Anthony Milford got handed a yellow card at the 62nd minute. Th floodgates opened up for England as the hosts capitalised on the Toa being a man down.

England put the pedal to the medal and scored six tries in the space of 15 minutes.

With ball in hand in the Toa Samoa red zone, England crossed over to seal the match at 60 points to 6.

With a match under their belt the Toa Samoa will now have to regroup and figure out what changes need to be made.

Head Coach Matt Parish will be under fire this week as he continues to lose matches.

Parish’s win percentage since 2015 is sitting at a mere 30% and will most likely be looking for a job if he can’t find success with players who’ve been dubbed “the best Toa Samoa team ever assembled”.