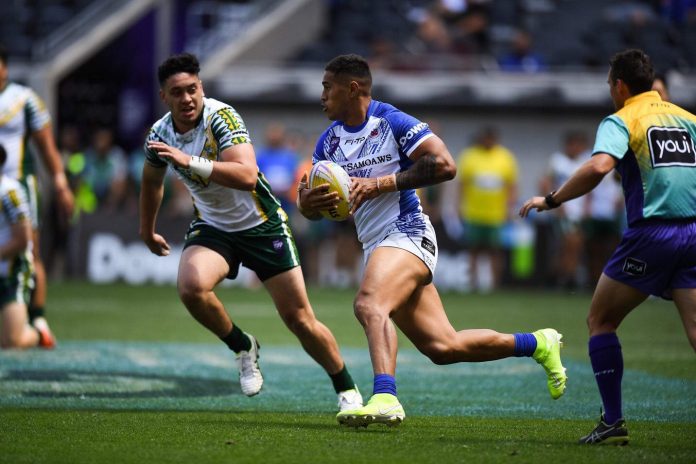 Samoa have continued their 9’s World Cup campaign with a second win against Cook Islands.

Samoa struggled in the first few minutes as Cook Islands played disciplined footy putting them in strike position to score.

Cook Island’s Tevin Arona stabbed a kick through looking to score but was not successful when he lost the ball foward.

Samoa stayed calm and managed to get hold of possession to finally put pressure on the Cook Island defence.

After a 60 metre break by West Tigers wing David Nofoaluma, Toa Samoa were in prime position to score and capitalised when Jerome Luai put Dragon’s centre Tim Lafai in for a try.

Samoa turned their defence into attack when they stood strong against a relentless Cook Island forward moving pack. Off the back of solid defence Samoa attacked down the right edge with Penrith Panther winger Brian To’o placing a chip kick for fellow Panther Dean Blore to score his first try in the blue Jersey.

Samoa came out of half time to take things up a notch.  Jarome Luai once again with his slick passing put Marion Seve into acres of space to dive in for Toa’s third try.

Cook Islands hit back straight away off the back of a good line break which putting John Puna over for their first try.

After a razzle dazzle ending from both teams, Samoa came out on top with a final score of 17-4.

Samoa will play Tonga in their final pool match.