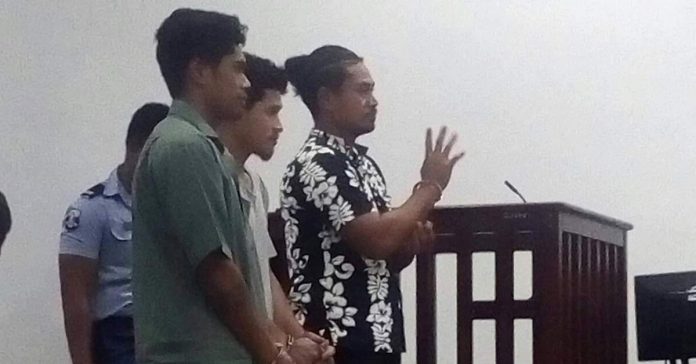 04 November 2020, Apia Samoa. Three young men appeared this week before the Supreme Court facing murder charges in relation to the death of a man in his 40s at Faaitoo-Uta on White Sunday weekend this year.

It is alleged that Siaki Pita, Junior Asotolu and Peter Wulf all in their early 20’s, were drinking locally made vodka with the deceased prior to the incident.

When an argument broke out between the four, the three young men being accused allegedly beat the victim to death. Police reported at the time that the victim had died at the scene from head injuries.

At the time Police Commissioner Su’a Fuiavailiili Egon Keil had spoken strongly about locally made vodka being found at the scene of the White Sunday murder.

In another incident this week, Commissioner Keil confirmed yesterday that a man in his 40’s is in police custody for allegedly hacking another man with a bushknife after a drinking session last Sunday where locally vodka was also involved.

A man in his 20’s fights for his life at the TTM National Hopsital at Motootua and continues to undergo multiple surgeries.

Still this year during Father’s Day long weekend, a 40 year old man was killed after being allegedly run down by another man following a drinking session where the Commissioner had also highlighted locally produced vodka being consumed prior to excessively violent behavior.

Samoa Global News has inspected the labeling of two locally produced vodka to find no percentage alcohol content or product ingredients stated on either bottle.

The Pacific Rainbow company making the Rover vodka merely has a mobile number and the volume of contents as 1.75 litres.

The Boom vodka also makes no attempt to display a percentage alcohol content, with its label simply stating the contact of the Skyline company and the volume of the contents.