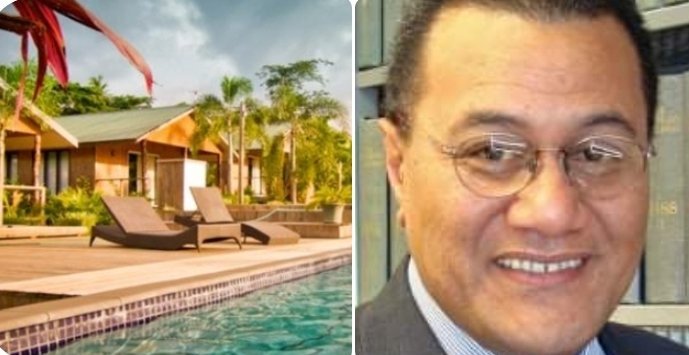 Samoa’s newly announced Chief Justice was moved from one hotel to another since arriving into Samoa, but is now settled into the Orator Hotel near Tuanaimato, to see out his 14 day quarantine.

Satiu Simativa Perese along with several other passengers selected by Air New Zealand and described as VIPs, arrived into Faleolo International Airport on Friday afternoon.

There is no clear information from the Ministry of Health or NEOC as to who the VIPs are, and where these passengers are being quarantined. It is understood that several VIP passengers from Friday’s flight, including the ANZ Bank Manager Bernie Poort and his wife, are self-isolating in their own homes.

The newly appointed and yet-to-be-sworn-in Chief Justice was first taken to Le Manumea hotel near Vailima on Friday afternoon. He and others were then transferred out of there on the same evening. Some were taken to Samoana Hotel across from Apia Park, while the CJ was taken to the Orator Hotel.

A staff member of Le Manumea Hotel told Samoa Global News that the hotel was expected to close down all its services and this was difficult for them in terms of business sustainability and loss of regular customers. So the CJ checked out again.

The owner of Orator Hotel, Fiaailetoa Charlotte Chan Mow Brunt said their hotel is now officially closed since the CJ checked in to be qarantined, including their restaurant and popular Sunday toanai.

“No other guests and no service such as bar and food available to outside guests from Friday 22 May 2020 for Orator Hotel. Our staff has been fully notified about this and we do not have Sunday Toonai today as well”.

However, the Prime Minister in a live interview earlier this week did refer to 10 passengers arriving on the 22nd of May, then in a more recent interview he said there were only six. Either way and despite the Prime Minister’s announcement – the necessary quarantine arrangements were not in place, prior to their arrival.

The repatriation flight was originally set for 22 May however Government announced its postponement to next Friday 29th May 2020 to allow passengers time to fulfill the entry requirements for Samoa.

According to the Samoa Prime Minister, the selection of VIPs allowed to travel to Samoa last Friday, was up to Air New Zealand.

As set by Samoa’s State of Emergency Orders, all repatriated passengers are to be quarantined for 14 days upon arrival into Samoa.

The National Emergency Operations Centre (NEOC) is the lead government agency in control of Samoa’s safety and well being at this time of State of Emergency lockdown for COVID-19. It is headed by the CEO of the Ministry of Natural Resources and Environment (MNRE) Ulu Bismarck Crawley, because this is the Ministry that oversees Samoa’s Disaster Management Office (DMO).

The last passengers into Samoa before borders closed two months ago were placed under compulsory quarantine in an LDS Church gymnasium at Mulifanua. Another group were taken to the St Therese Retreat at Leauvaa and families were held at Moanalisa Hotel in Vaitele. A few were taken to the Orator Hotel. Passengers interviewed by Samoa Global News at the time that they fully supported the measures taken to ensure Samoa’s safety.

At that time, one passenger was reported by the Samoa Observer as having been allowed to self-isolate after an MNRE vehicle picked him up from the quarantine campsite. Samoa Global News has a source saying it was the Head of the NEOC himself, Ulu Bismarck Crawley who had picked up the young man and removed him from the group quarantine site.

State of Emergency Orders are being enforced by the Samoa Police Service and to date, over a thousand small businesses have been issued fines with a total of $22,000 tala confirmed to have been collected from those who have breached SOE orders as laid down by the NEOC.