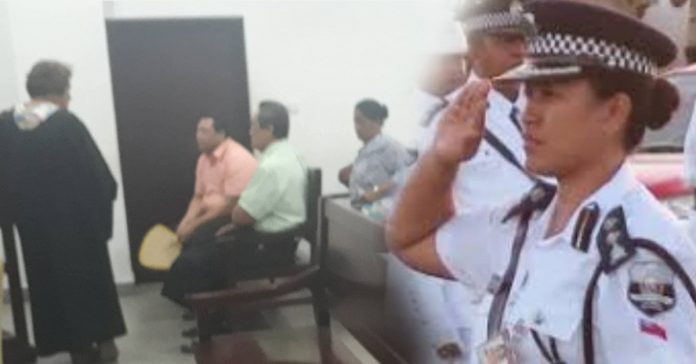 18 March, 2019. Samoa – Notorious criminal Tagaloasa Filipaina currently serving a life sentence for 2 separate murders has told the Court that he wants to return to Tafaigata where the prison guards understand his food preferences and he is able to enjoy privileges that are not available at the Apia prison.

Filipaina and relative Ovaleni Poli Viali, were moved from Tafaigata and taken to the Apia police cells last February for allegedly masterminding an aborted mass prison breakout as Samoa braced itself for the approach of Cyclone Gita in February last year.

Taking the stand at a Court hearing before Justice Tafaoimalo Leilani Tuala-Warren, the maximum secruity prisoners said that they want to go back to Tafaigata where “they have the freedom to cook, attend church, have access to music, watch television, read newspapers and books, have more time with their lawyer and longer visits with their family“.

The drug Lord who was first convicted with the murder of a police officer told the Court that all the prisoners and the many prison guards as well as police, know of his food preferences. For example, they know that he does not eat chicken and eleni sosi tamato.

“In my cell, there is no light, only a light outside;

“There is a door but no window and no sunlight comes inside,” he told the Court.

A trip to the hospital “is the only time I see the sun,” said Tagaloasa Filipaina.

He added that there were insifficient reading materials and the only book he has in his cell is The Holy Bible.

However Deputy Police Commissioner Papalii Monalisa Tiai-Keti explained that the prisoners do get an hour a day to be outdoors.

“Your Honor the prisoners get an hour each and every day, where they are able to go out, sit around the outside of the premises, walk around and breath the fresh air.”

Unasa Iuni Sapolu told the Court her clients are not getting the same privileges they used to get at Tafaigata.

During cross examining, Deputy Police Commissioner Papalii was asked by Unasa to look at the two prisoners.

“Monalisa look at them, they look pale,” said Unasa.

“These beautiful dark-skinned men have turned pale. Their skin was different, they were darker,” she insisted.

Unasa went on to say that her clients are lacking Vitamin D, needed for strong muscles and bones, and because of lack of exercise, Unasa said their muscles are now under-used.

“Vitamin D that comes from the sun helps the person’s skin and exercising helps the muscle tissue,” she said.

The Deputy Commissioner told the Court that they had not heard of this grievance before.

“Your Honor the prisoners have never mentioned this need to be out in the sun;

But Papalii explained that the showers used by the prisoners are the same ones used by police officers, and said that they are cleaned on a regular basis.

During Ovaleni’s testimony he told the Court that he wants to go back to Tafaigata because he wants to attend church and he wants to cook which is something he used to do there.

Justice Tafaoimalo Leilani Tuala–Warren has adjourned the matter to the 3rd of April for her decision.