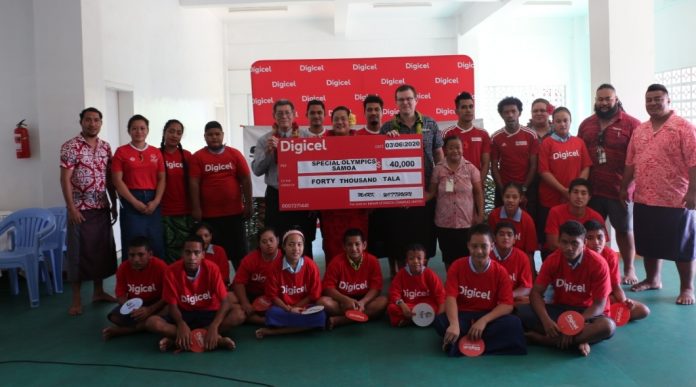 Wednesday, 3rd June 2020 I Apia I Samoa, Digicel have announced their continued sponsorship of Special Olympics Samoa (SO Samoa) to the value of $40,000 Tala and SO Samoa National Director, Unasa Elizabeth Ah Poe says the partnership with Digicel is more than monetary.

“We are extremely grateful to Digicel for its continuous support not only financially but emotionally too – they believe in us, in the athletes and in the movement; they have always been there from the beginning”, said Unasa.

Digicel Samoa CEO, Mark Witthuhn presented the cheque to the SO Samoa National Director and management of the organisation which has seen a substantial growth in the number of athletes since its establishment in 2009.

Digicel Samoa CEO, Mark Witthuhn said; “Special Olympics Samoa has always been close to our heart and we’ve seen it grow from strength to strength each year as it makes invaluable contributions to the lives of athletes and their families that goes well beyond sports. We’re extremely proud of the work that the team are doing to give visibility to people with intellectual disabilities.”

“At Digicel, we promote an inclusive society and most importantly, stand by to develop and provide opportunities for people to realize their potential and strive together for excellence and appreciation of all different abilities,” added Mr. Witthuhn.

The Special Olympics global mission is to provide year-round sports training and athletic competition in a variety of Olympic-type sports for children and adults with disabilities, giving them continuing opportunities to develop physical fitness, demonstrate courage, experience joy and participate in a sharing of gifts, skills and friendship with their families, other Special Olympics athletes and the community.

This is a dream that has, and will continue to be, realized for athletes in Samoa. In 2019, 18 athletes travelled to Abu Dhabi, UAE to compete in the Special Olympics World Games. The Samoan contingent returned with 8 medals that year having competed against 190 other countries, a momentous achievement for all involved.

As the countdown begins to the Special Olympics World Games in Berlin, Germany 2023, this continued partnership is a much welcomed reassurance of support to the team.

Unasa Elizabeth Ah Poe echoed sentiments; “We’ve witnessed the power of the Special Olympics model. Everyone has a gift and everyone deserves the chance to be included, celebrated and accepted”.

“SO Samoa has been able to grow in numbers of athletes, coaches and activities, and developed year-round sports programmes of fun, physical fitness, inclusion and friendship”, she added.

ABOUT DIGICEL GROUP
Digicel Group is a total communications and entertainment provider with operations in 31 markets throughout the Caribbean, Central America and Asia Pacific. Digicel also runs a host of community-based initiatives across its markets, including Digicel Foundations in Haiti, Jamaica, Papua New Guinea and Trinidad and Tobago which focus on educational, cultural and social development programs.