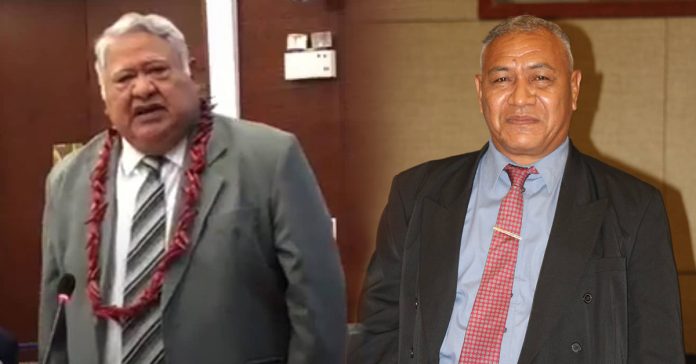 23 January 2019, Apia Samoa. Salega East Member of Parliament, Olo Fiti Vaai says that the many issues arising from within government ministries and state-owned enterprises can be described as corrupt.

The opposition MP made the remark while addressing Parliament yesterday afternoon during deliberations on the supplementary budget.

Olo observed that 2018 saw many challenging issues emerge from within various Government Ministries and Organisations.

But the MP went further to say that in terms of  parliamentary governance and proper process, what is actually happening inside Government at this time is “corrupt”.

In attempts to justify his claims Olo said that he counted 530 job vacancies across every ministry and SOE with funds being reallocated to other activities when positions are not filled within the budgeted financial year.

Prime Minister Tuilaepa Sailele Malielegaoi hit back to defend the work of the government telling the MP to watch his words.

“That doesn’t mean the government is corrupt..that is the process when noone applies for the advertised positions”, said the Prime Minister.

“Do you know what corrupt means? It means crooked..tell me, what crooked practices? Oa mea piopio, sei tali mai.”

Olo said that Annual Reports of Government organisations used to come to Parliament for their information and scrutiny. “But now just recently, the reports are only presented to sub-committees of parliament with only 5 members”.

Tuilaepa corrected Olo saying that the process he refers to has been in place since 1995 long before Olo entered Parliament and that is why “Mulimai must always ask Muamai”.

The PM went on to accuse Olo of being too critical and one-sided in his opinions towards Government.

Olo had begun his submissions by thanking the government as well as heads of ministires and state owned enterprises, singling out the new CEO of Finance.

“Lau Afioga Leasiosio we are going to work together. Your name means tornado. My advice to you is, if the Prime Minister and Cabinet give you a hard time, respond as a tornado towards them, and let me know..as I said, we will work together.”

The Prime Minister rebutted to remind Olo that there were over 30 CEOs of Government and they should not be directly addressed in Parliament because they do not respond.

Olo acknowledged that the economy was moving ahead but said Government funds were being wasted as a result of carelessness.

The Prime Minister argued that incidents such as  car accidents did not mean one was corrupt.

“We have auditors and lawyers who deal with these things.”

Furious with the accusation of corrupt practices towards his Government, Tuilaepa also added personal attacks on the MPs private business operations.

“You have run businesses on Government porperty and people complained not being able to sleep from the noise. Don’t revel in pointing out bad things without thinking about yourself first,” said Tuilaepa.