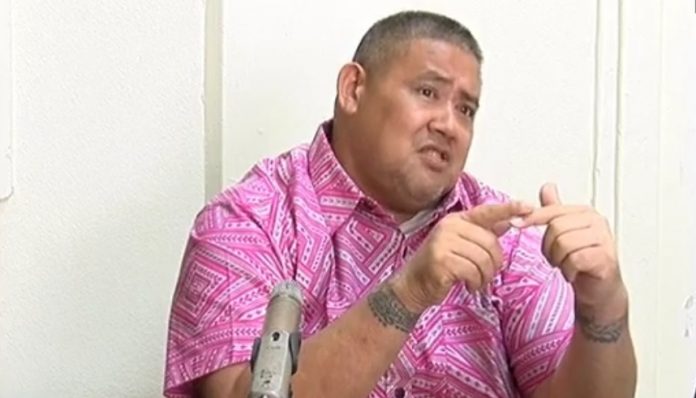 A priest who gave an example that questions the role of young female victims in incidents of rape, has responded to say that he does not support perpetrators of sexual assaults, but still believes that questions should be asked of victims.

In teaching sin and the occassion of sin on a live televised program last week, Father Mailo Stowers used an example where a man coming home from the plantation after a hard day’s work, is met along the road by a young girl – teneitiiti.

Last night on Upu Mana TV, Father Stowers reiterated that in the example given, if a young girl is raped, then we must not only look at the sin, but also to the occassion of sin, which he says are the triggers that enticed the sin – le faaosoosoga.

Holding up his hands to reiterate that there are two sides to this incident, Father Stowers says, “When rape happens here, we put all the blame on the man..on this person here..” he says referring to the rapist in his example.

“But we don’t ever question this other person, on this side over here,” he says, referring to the victim.

“Firstly why was she there? It’s evening and she should be home… Secondly, why doesn’t she put on the right clothes?.. wear a olomuu that covers her from top to bottom..”.

In his response on Upu Mana TV last night, Father Stowers said he was sorry if anyone had taken offense, but believed that viewers had misinterpreted his teaching.

Father Stowers explains that a good example of the occassion of sin or things that trigger and entice sin, are the actions of victims, which is why questions have to be asked of them.

“There are questions we must ask of the victim,” he insisted.

“Like the example that I had given – she was there at the wrong time.., and wearing the wrong clothes…these are the two areas I was trying to highlight”, said Stowers.

Father Stowers rejected claims that his example justified the actions of rapists and posed blame on victims.

“I did not say that I support the actions of criminals, no, a criminal is a criminal.”

“I did not try to put down women, no I am trying to lift them up, women are the apple of their brothers’ eyes.”

“This does not justify the rape, no it has been done,… but like I’m trying to explain, there are questions that we must still ask this other side”, said Father Stowers referring to victims.

It is the position of Father Stowers that victims must be questioned in areas where they may have themselves, enticed the act of sin committed toward them – faaosooso i le agasala.

“So questions like, what is she doing there at the wrong time? A time in the evening when she should be at home….for example”.

“And.. have a look at the clothes she was wearing that enticed the sin,” said Father Stowers.

What is Victim-Blaming and Why is it Dangerous?

Victim-blaming is where society fails to focus on the perpetrator of the crime, and instead, puts blame on the actions and decisions of the victim or survivor by asking questions like, Why was she there? What was she wearing? What exactly did she say or do?

Victim-blaming overlooks the fact that rape and abuse is the abuser’s CHOICE. When society engages in victim-blaming attitudes, it helps to justify the actions of the abuser and allows them to continue the abuse, rape or sexual assault, while avoiding accountability for their actions.

Sexual assault and rape are grossly under-reported. Victim-blaming makes it harder for victims to come forward and report the abuse. If the survivor knows that you or society blames her for the abuse, she or he will not feel safe or comfortable to come forward.

Victim-blaming attitudes also helps to reinforce what abusers always insist – that it is the victim’s fault this is happening.

A 2018 National Inquiry Report into Family Violence in Samoa found that “20% of women reported being raped, while  10% of respondents reported having been raped by a family member in their lifetime”.

As with all self-reported statistics, the actual numbers are thought to be far higher.

At the Mulinuu courthouse, not a week goes by during Monday morning criminal mentions that a case of rape, sexual assault and indecent acts towards young women and girls is not heard.

In the past month of June 2020, a father was before the Courts accused of raping his 14 year old daughter and a 22 year old was found guilty of raping a 7 year old girl from Savaii. Last year a 20 year sentence was handed down for a father who raped two of his daughters. More often than not, the perpetrators blame the young victims for enticing them to commit the crime for “being there” or for “what they wore”.

Victims of rape and sexual assault should contact Police on 22222 or the Samoa Victim Support Group on the free calling number: 800-7874.