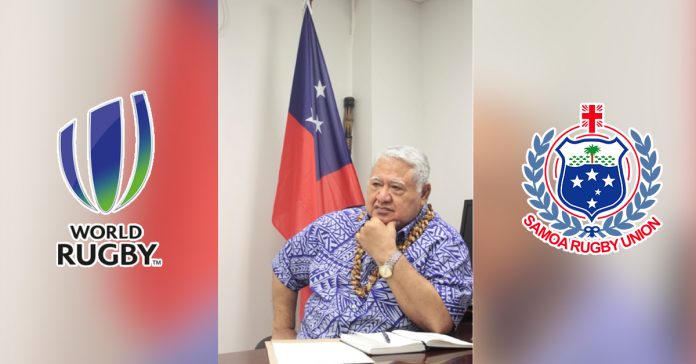 12 March 2019, Apia Samoa.  Much has been said in the media by rugby supporters and players associations about World Rugby’s proposed global competition of 12 nations which excludes the Pacific Tier 2 rugby nations of Samoa, Fiji and Tonga.

The competition believed to be linked to annual broadcasting income of NZD $10m – $14m per union, is proppsed to run for 12 years with bigger unions believed to be still objecting to a promotion and relegation option to allow Tier 2 participation.

In an interview with the Savali Newspaper, the Prime Minister of Samoa who is also the Chair of Samoa Rugby Union has spoken out to highlight the injustices of World Rugby’s new competition giving examples and details of its negative impact, and says they are only playing lip service when it comes to the development of Tier 2 nations often unable to access top level competitive matches.

The One-On-One Interview is published below in verbatim.

SN – Our Rugby fans are very confused with the newly proposed World Rugby Competition to start in 2022 that will exclude the Pacific Islands Rugby Unions of Samoa, Fiji and Tonga. What really is this Competition’s new structure that has caused so much controversy and who are behind it?

The proposed concept is the brain child of three powerful bodies that control the Sport of World Rugby, namely, the SANZAAR Rugby Unions of Argentina, New Zealand, Australia and South Africa and the 6 Nations Rugby Unions of France, England, Ireland, Scotland, Wales and Italy; and of course – World Rugby itself. These 10 Unions plus the Japanese and USA Unions makes up the 12 rich Rugby Unions in the new World League competition. They are the rich and wealthy rugby playing nations. This new competition is proposed to run for 12 years and our Pacific Rugby Unions will be excluded for the entire period of the competition.

This means that not only are Pacific Teams excluded, but all other Rugby Playing Nations will be relegated to second class status, which is contrary to the often-proclaimed World Rugby objectives of growing the sport internationally; and to care for the welfare of our 9 million rugby players; and sustain the interest of over 300 million Rugby fans worldwide.
This new concept will treat Tier 2 Unions as mere breeding farms for the Rich 12 to pick and choose players from. Then on top of that, players aged 20 years in 2022, at the height of their careers in the Island teams will be denied the opportunity to play top rugby for the whole period of 12 years.

Savali: What are the causes of these sudden changes of attitude?

Their hypocrisy is very clear. We can see it’s just lip service when there is talk of development for Tier 2 Nations.
The “do as I say and not as I do” syndrome is alive and well in this popular Sport of World Rugby. The inclusion of Italy and the United States, who are not in the top 12 world rankings, clearly points to greed and selfishness.

SN:   Perhaps the track records of the Pacific Teams were not as great?

That’s simply incorrect. Since Manu Samoa, from a Tier 2 member union, entered the World Cup competition in 1991 they have beaten Italy, Ireland, Scotland, Wales, Australia and Argentina; and reached 7th place in the 2013 World rankings, the highest ranking achieved by a team from a Pacific Island Union in 15-a-side competition. Fiji and Tonga also performed exceptionally well in the World 15 Rugby Test competitions. Fiji is now in the top 10. In Sevens Rugby, Fiji dominated these World competitions and also won the first Gold Medal in the Olympics when Rugby was re-introduced at the 2016 Games. Manu Samoa also won the Rugby Sevens World Championship in 2009/2010. With these kinds of record performances in both 15’s and 7’s Rugby in world competitions, it is mind-boggling that World Rugby bosses should continue to ignore the talents of our players and our Rugby Unions. Even in the All Blacks, Wallabies and 6 nations’ Rugby Unions, our Pacific players contribute massively to the quality of their teams and their games.

SN: As Chairman, what suggestions do you have to change the status quo – to ensure equity and fairness in the structure of the competition?

There are three vital changes needed to raise the quality and incorporate fairness in to competitions, for the sportsmen and sportswomen as well as the Unions themselves.

Firstly, the eligibility rules should be more liberal. Like those adopted by World Rugby League. The best approach for Tier 2 Nations is for Member Unions to pick the best players for their Test Matches then allow unselected players to play for the country of their roots. In this way, competitiveness is maintained and the competition becomes more exciting for the fans worldwide.

Secondly, the gate-sharing of the amateur days of rugby, in which the host Union takes all, should be replaced with a more professional sharing ratio of 50/50 for the visitors and host team, for any competition. This will ensure a more balanced distribution of the gate takings for games held in rich or poor nations.
If this gate sharing is modernised to a sharing ratio that appropriately reflects the professional era we have long been in, the revenue derived from the sweat of our island players when touring the super-rich venues of England is enough to meet our yearly budget for every annual tournament we participate in, every year in the Northern Hemisphere. Then Tier 2 nations should never have to resort to or be branded as beggars, depending on handouts.

An international match in Samoa can only yield, at the most, US$10,000 in gate takings – which is peanuts! That, versus the many, many, many millions of pounds collected at one match in England.
Does that seem fair?

The current annual tours by Tier 2 nations only serve to fill the pockets and replenish the already fat bank accounts of the Irish, Scottish, English, Welsh, French and Italians every year and our small Tier 2 Unions continue to struggle, year in and year out, with huge bank overdrafts.

Thirdly, World Rugby must adopt “one country one national team” in

World Competitions – as it is done in the Olympics and all the other World Sports. We have perpetuated this absolute nonsense – of four national teams by the United Kingdom – for so long and the worst part is the silence from the older Unions like South Africa, New Zealand and Australia in the Southern Hemisphere. Their silence speaks volumes.
Why?
Rugby is a 20th century sport, where the colonial mindset is a thing of the past. So as long as this abnormality continues in World Rugby, with four National Teams for the United Kingdom alone, the voting power will always be skewed in favour of the kind of decision-making that is not inclusive and is harmful to the best interests of the Sport internationally.

Many Pacific Island boys play for the All Blacks and the Wallabies, wouldn’t these two Unions help the cause of our Pacific players?

I am most disappointed with the lackadaisical attitude of the Managements of these two Unions, where our island players have contributed so much to the development of their game.

Manu Samoa was included in the early days of the SANZAAR Super 10 competitions and Manu Samoa beat some of the top provincial teams in Australia and New Zealand such as Queensland, Otago, Waikato and Auckland. For three consecutive years Manu Samoa represented the Pacific, having been champion of the Three Nations competition then suddenly Manu Samoa was dropped unilaterally. The Super 10 competitions teams were extended to Super 15 and still the Executives of the All Blacks and Wallabies continued to go over our heads and talked about bringing others in, still ignoring the Pacific Teams and ignoring the great contributions made by our boys to the sport of rugby. The same also applies to the efforts of other rugby playing nations outside of the rich 12 Rugby Unions specially picked for the new Competition.

SN: What could be done to correct these injustices you speak of, in the World of Rugby, as a sport popularised by hundreds of millions of viewers worldwide?

In Samoa we also face many injustices within the sports clubs’ managements, impacting on our sportsmen and sportswomen’s performances. To correct these injustices, we established a Tribunal by law to adjudicate on complaints raised by affected members. Perhaps it is time for a World Tribunal, established especially in a neutral venue like “The Hague”, to adjudicate on contentious issues that are so blatantly wrong and which destroy the spirit of sportsmanship for millions of the world’s rugby youths of today that will become world leaders of tomorrow.

SN: As a way forward, what could be a better alternative?

A better alternative to consider would be to stage two competitions – a Tier 1 competition to include the top 12 ranked teams in the world and a Tier 2 competition to include the next 12 teams, chosen on the basis of their ranking. At the end of the season the worst performing four Teams in the Tier 1 competition move down from Tier 1 and the best performing four Teams from Tier 2 move up to Tier 1.
Also, all participating Unions must receive broadcast compensation payments, plus the change in gate sharing, etc.

This is a more positive pathway for Tier II Rugby Nations to move up the ladder in World Rugby.

SN: Any final comments on this issue?

I look forward to our first World Rugby Council meeting in Dublin soon.