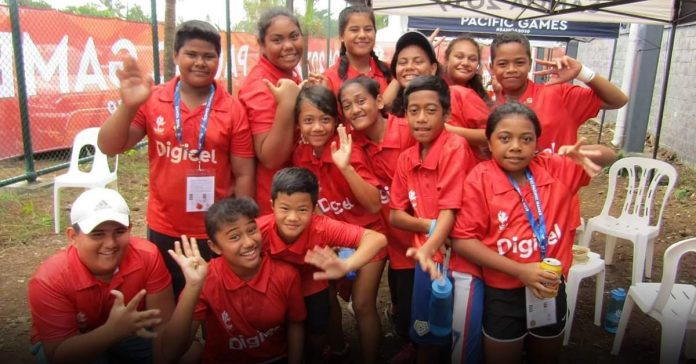 15 July 2019, Pacific Games Apia Samoa. The sport of tennis has the youngest volunteers of the Pacific Games with “ball kids” seen working hard as we head into the second week of competition at the Apia Park Courts.

Orlando Lui Zhu was relaxing on a lunch break with his friends when Samoa Global News caught up with them.

“We’re the ball kids!,” the excitement in their voices as they sat in a tent behind the Courts enjoying the meals provided for volunteers.

There are over 50 volunteer ball kids aged 11 years and older working hard behind the scenes at Apia Park tennis courts. Two of Samoa’s junior tennis players Orlando Zhu and Dorris Moors who are 9 years old were granted special permission by competition manager Tagaloa Yvonne Carruthers to join the group and gain experience.

“I was too young because it was supposed to be for kids 11 and over.., but Ivoga said that it was ok, I could still be a ball kid!” says Orlando who certainly seemed to be more than qualified for the role.

The youngsters are seen moving effortlessly around the Courts during matches, managing the score boards and gathering tennis balls unnoticed and without causing any disruptions.

“Is this going to be in the news?” Orlando asks as they gather together to pose for a photo.

“Yes it is.., after we get your Mom’s permission.”

As we leave them to have their lunch we hear Orlando telling the others, “Yaay, we’re going to be famous!”.

Tennis Teams events concluded last week and continues into week 2 with Singles for Men and Women, and Doubles division for Men, Women and Mixed.