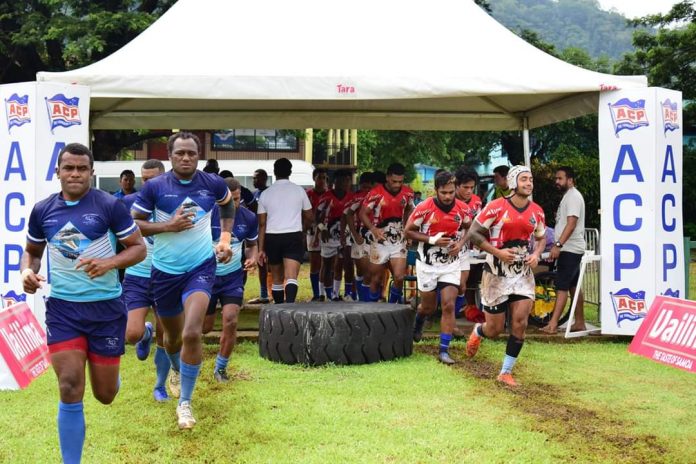 The semi final will be played between BBE Vaiala and AYI Fiji, while SCB Apia Maroon face Tepatasi from Aleipata. The plate will see OTT Construction Tamauli from Salelologa play Laulii and Lupesiliva from Sapapalii to face hosts Vailima Marist St Joseph’s.

Blackie vs Tamauli
Vaiala starved Tama Uli of possession and their experienced backline proved too much for the young guns of Salelologa. Blackie Yes trio of Malu Falaniko, Murphy Paulo and Patrick Faapale, all players who have represented Samoa in International 7’s were the try scorers in Vaiala’s 21-7 win over Ott Construction Tamauli.

Maroon vs Lupesiliva
Both teams came out giving their all but neither team could cross the tryline in the first half, or the first six minutes of the second. Apia Maroon missed a try when Silao Nonu dropped the ball on the tryline. Finally as time expired Ionatana Tino powered his way over to advance Maroon to the Tupua Fred Wetzell Cup semi-finals.

Marist vs Tepatasi
Tepatasi took an early 5-0 lead. Marist hit back scoring two fantastic tries to lead Tepatasi 12-5. That lead did not last long at all and scores became 12-12 in the dying minutes of the match. Marist defended, defended and defended gruesomely with a lot of heart but the pressure applied by Tepatasi became too much. A penalty was conceded and a slick Aleipata quick tap secured the win for them in referees time.

Fiji vs Lauli’i
Again another tough but tryless first half. Lauli’i go to halftime in a good position to possibly upset the tournament favourites. However that all changed in the second half when the AYI Fiji team returned to  take things to the next level. In true Fiji fashion, before anyone knew it, the score was 21-0. Despite fighting hard Laulii now drop to the Plate semi-finals while Fiji continue their Cup Journey.