The 94th Academic Award Ceremony, hosted by Regina Hall, Amy Schumer, and Wanda Sykes, brought with it many exciting and surprising moments.

The Oscars returned to the Dolby theatre in Hollywood with an absence of many nominees due to Covid restrictions. Lin-Manuel Miranda, who had two films in competition – Encanto and Tick, Tick … Boom! – could not attend because his wife had tested positive.

Jessica Chastain won the Oscar for Best Actress, awarded by presenter Anthony Hopkins. A first-time winner, Chastain plays former televangelist personality Tammy Faye Messner, who once had a cult following with husband Jim Bakker on their religious broadcasting network before he was jailed for fraud and enveloped in a sex scandal, in the Michael Showalter-directed film.

“So many people out there feel hopelessness and alone and suicide is a leading cause of death in the United States,” she noted.

“It’s touched many families. It’s touched mine and especially members of the LGBTQ community…we’re faced with discriminatory and bigoted legislation that is sweeping our country with the only goal of further dividing us. There’s violence and hate crimes…in times like this, I think of Tammy and I’m inspired by her radical acts of love.”

Seventeen-year-old Ruby (Emilia Jones) is the sole hearing member of a Deaf family — a CODA, or “child of Deaf adults.” Her life revolves around being an interpreter for her parents (Marlee Matlin, Troy Kotsur) and working on the family’s struggling fishing boat with her father and older brother (Daniel Durant), everyday before school. But when Ruby joins her high school’s choir club, she discovers a gift for singing and soon finds herself drawn to her duet partner, Miles (Ferdia Walsh-Peelo). When she is encouraged by her enthusiastic choirmaster (Eugenio Derbez) to apply to a prestigious music school, Ruby is torn between the obligations she feels to her family and the pursuit of her own dreams. 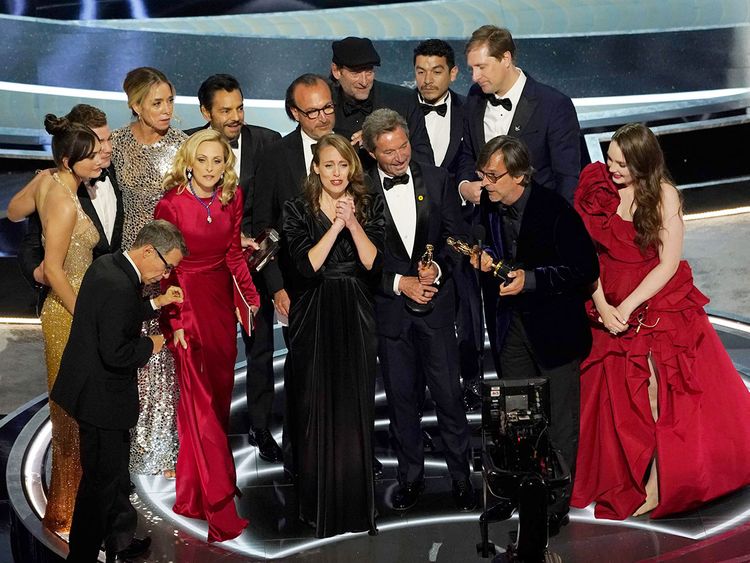 Although there were not many surprise winners, there were certainly surprise moments. The mood and energy took a shocking turn after comedian Chris Rock made a joke about Jada Pinkett Smith, and Will Smith took to the stage from his front row seat and slapped the comedian in the face. Moments later an emotional Will Smith walked up to the stage, this time not to slap anyone, but to accept his first ever Best Actor Oscar Award for his role in the film King Richard. On stage he apologized to the Academy and to his fellow nominees.

Denis Villeneuve’s multi-nominated film “Dune”, took out six of its 10 nominations making it the most recognized film of the night.

Jane Campion’s “The Power of the Dog” was up for 12 nominations. The Kiwi director, screenwriter, and producer was the first woman to be nominated twice for Best Director, this year took out the Best Director award.

As anticipated by the many, Encanto took Best Animated Film.

Best Director – Jane Campion, The Power of the Dog

Best Actress in a Leading Role – Jessica Chastain, The Eyes of Tammy Faye

Best Actor in a Leading Role – Will Smith, King Richard