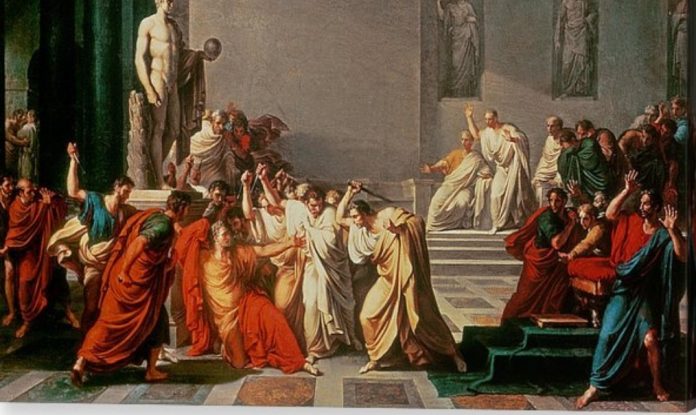 Julius Caesar, the ”dictator for life” of the Roman Empire, is murdered by his own senators at a meeting in a hall next to Pompey’s Theatre. The conspiracy against Caesar encompassed as many as sixty noblemen, including Caesar’s own protege, Marcus Brutus.

The assassination of Caesar was the result of a conspiracy by many Roman senators led by Gaius Cassius Longinus, Decimus Junius Brutus Albinus, and Marcus Junius Brutus. They stabbed Caesar (23 times) to death in a location adjacent to the Theatre of Pompey on the Ides of March on the 15th of March 44 BC.

Caesar was scheduled to leave Rome to fight in a war on March 18 and had appointed loyal members of his army to rule the Empire in his absence. The Republican senators, already chafing at having to abide by Caesar’s decrees, were particularly angry about the prospect of taking orders from Caesar’s underlings. Cassius Longinus started the plot against the dictator, quickly getting his brother-in-law Marcus Brutus to join.

Caesar should have been well aware that many of the senators hated him, but he dismissed his security force not long before his assassination. Reportedly, Caesar was handed a warning note as he entered the senate meeting that day but did not read it. After he entered the hall, Caesar was surrounded by senators holding daggers. Servilius Casca struck the first blow, hitting Caesar in the neck and drawing blood. The other senators all joined in, stabbing him repeatedly about the head.

Marcus Brutus wounded Caesar in the groin and Caesar is said to have remarked in Greek, “You, too, my child?” In the aftermath of the assassination, Antony attempted to carry out Caesar’s legacy. However, Caesar’s will left Octavian in charge as his adopted son. Cassius and Brutus tried to rally a Republican army and Brutus even issued coins celebrating the assassination, known as the Ides of March. Octavian vowed revenge against the assassins, two years later Cassius and Brutus committed suicide after learning that Octavian’s forces had defeated theirs at the Battle of Philippa in Greece.

Antony took his armies east, where he hooked up with Caesar’s old paramour, Cleopatra. Octavian and Antony fought for many years until Octavian prevailed. In 30 B.C., Antony committed suicide. Octavian, later known as Augustus, ruled the Roman Empire for many more years.