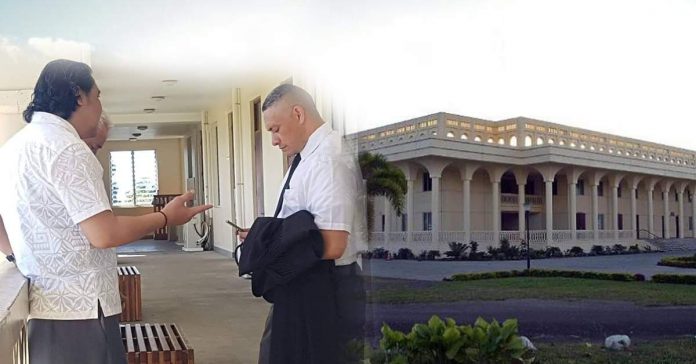 The trial of Kolani Junior Lam accused of murdering his wife and former CEO of UTOS, Sa’u Justina Sa’u continues in the Supreme Court of Samoa before Justice Mata Tuatagaloa.

The St Mary’s Savalalo student was not shaken by questions or the cross examination of defence counsel as she relayed her account of the events of September 2016 where the defendant allegedly grabbed Justina’s daughter, Talei by the neck and threw her.

During cross examination defence counsel Leiataua Komisi Koria put to Karena that his client says he had held Talei by the chin, and not by the neck.

“No, he grabbed her by the neck not the chin,” Karena insisted.

According to Karena’s testimony Kolani Junior Lam had lifted his step-daughter Talei up off the ground by the neck.

“The time Kolani held Talei by the neck, her feet was a little bit above from the ground;

“The time he held her by the neck, Talei looked teary in her eyes and struggling for air.”

Karena had conveyed a similar story to Talei’s version in the lead-up to the incident. Kolani’s daughter Chizelle had wanted to play Xbox but Talei had told her to come amd watch TV with them instead. This led to a disagreement between the young girls so Kolani came into the house to defend his daughter. Kolani had allegedly been out back with his friends drinking on the night.

Karena said she yelled out, “stop!” and that is when Kolani threw her cousin across the room. She told the Court that she then ran to the kitchen to tell the housegirl.

The youngster was also asked by defense counsel if she and Talei had ever talked about Kolani. Karena said yes they did. Defense counsel asked of they spoke about good things or bad things.

Defence counsel asked the youngster why they only spoke negatively.

Karena responded, “We only spoke bad things because there were no good things to say about Junior,”

Justina’s brother Leiataua Lolagi Evile later took the stand and said that his daughter was staying at Sinamoga with Kolani Junior on the Thursday night of the incident.  When he came to pick them up after school on Friday for the weekend, this was the first thing his daughter described to him when she jumped into the car.

Lolagi told the Court that when they picked up Talei from Robert Louis Stevenson school, he asked her about the incident but his niece didn’t respond. Instead she just cried.

The case continues to go through the long list of 30 expected police witnesses that will include three housegirls, Sau’s friends, pathologists and medical doctors.