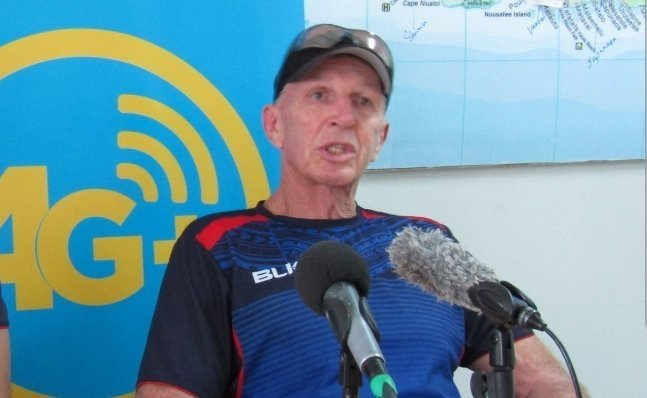 Sir Gordon Tietjens dismissed suggestions that he should resign given that Manu Samoa 7s is at its lowest ever position on the HSBC World Series table since he took over as Head Coach.

In response to questions from the writer at a press conference called by the Samoa Rugby Union yesterday, Tietjens did not appreciate the suggestion by some fans on public discussion forums that he should consider resigning before the end of his contract, now in its final year.

“I have a job to do,” said Sir Gordon who has not been able to secure an HSBC tournament win for Samoa since he took up the role four years ago.

Sir Gordon also defended the current placing, saying this is not the worst result Samoa has had, and that we have been in the 13th place before.

He said he thought the team got off to very good start in Dubai before disappointing performances in South Africa, Hamilton and Sydney.

“Obviously we are very unhappy with the result in Hamilton and the tournament in Sydney;

“If I”m being a realist which I always am and I look at the results, we might be winning;

“But we’ve basically got a new team at the moment, we’ve been slammed with injuries;

Sir Gordon says he is bringing in, “some new younger players”.

“I look at the performance so there are players that we are missing from last year when we finished six last year, which is an incredible effort.”

Belgium played the first two tournaments before securing a contract in England. Alamanda Motunga has played every tournament this year except Sydney when he was replaced by Philip Luki due to injury. Tila Mealoi and Siaosi Asofolau are no longer in the Sevens program.

Sir Gordon says it is really important in Samoa to build and create player depth.

“There is a lot of potential, and with these new younger guys Sione and Tuitama and Kelvin Masoe – they are young guys we need to put through”.

“How do we create depth? The only way you do that you gonna bring the young boys through and you gotta give them game time,and put them on the park and give them that experience, Experience builds depth at the moment we havent got that, but I can tell you there is some huge potential there”

The former All Blacks coach went on to say that in terms of the HSBC World Series, Samoa needs to understand how tough the competition is now.

“It is very very tough now, there are no easy games;

“If you look at the last tournament in Hamilton, we were so close to play at the semifinal but we lost on full time to France;

“We got a really bad call from refree;

“We had meetings with the referees to discuss some of our reasons;

“Also we played Argentina and it was 21 all at full time, and again another infringement at a crucial time.”

“But what concerns me was our slow start, starting slowly on the game you got to chase the game and we got no excuse for that, the players have to look at it;

Sir Gordon Tietjens says a lot of people don’t understand the new format, which has worked against Samoa.

“For instance we’re in some tough pools, and you have to win those pools to go through to a semifinal, there is no quaterfinal;

“In the past you have an opportunity to actually get runner up, look at the leg in Dubai it was the old system, if it hadn’t been this new system, we would have made it to the semifinal.”

Asked what message he has for Samoan fans both local and around the globe, Sir Gordon Tietjens says, “Well I can say to the people of Samoa that our team is giving their very very best for the resources that we have.”