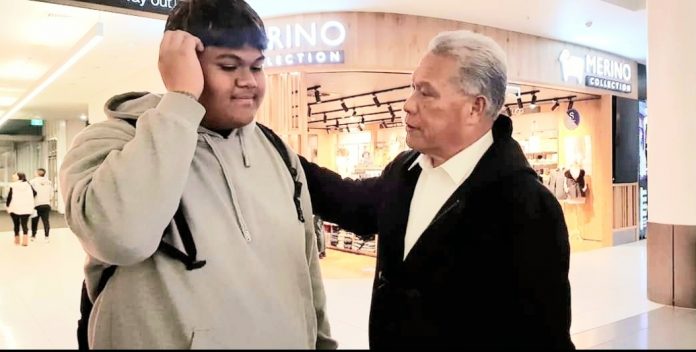 09 August 2020, Fathers Day. On this Father’s day, we pay tribute to that uncle that every Samoan is blessed to have in their lives.

The uncle who keeps the extended family together, where everyone goes to nofo aoga, and whose words of wisdom given firmly but with love over the years, have helped to shape us into who we are today.

That uncle whom your own parents report you to when you play up. And so during family toanai talks, you get a public telling off to make sure you and others learn, and not repeat the same offence in future. Out of the blue during toanai serious-talk-time, you hear your name, followed by “the talk” and the okegiaga lol🙈 #nomorecheeky

My uncle, Toeaina Faatonu Malolo Manumalo Reverend Lucky Richard Slade, is that uncle for me and my brother, and so many of our cousins in Generator 2 and 3. He served the EFKS Church for 46 years, 35 of them with his beloved EFKS Te Atatu, NZ, before his retirement in 2018.

As a father, when any of us leaves for school or work overseas, he whispers those words of wisdom that stay with you forever. The same words that come back to haunt you just as you’re about to be faalogokaga, and do something you’re not supposed to do.  #kuuloa

As a husband, his love for our aunty Terri inspires us. I have watched and observed how he loves and adores his wife, setting such an awesome example of love and marriage for us, and especially our sons.

His love for “Mom” as calls our aunty Terri, inspires us. He is always poking fun and teasing aunty infront of us, affectionately calling her Mom or her full name, Telesia Leutu to make her laugh when he knows (but won’t admit) that he just may be in the wrong 😍.

What we did notice when he would travel to Samoa without aunty, is how much he would miss her. Kei lava ua cut short le trip, as uncle finds an excuse to change his ticket and return to NZ earlier than planned 😃.

During family faalavelave, he always contributes more than the allocated saogamea, and provides the best and largest ietoga. And often times, we would wish that he wasn’t the faifeau.., because out of all the matai holders in our family, respectfully, our faifeau uncle is the best orator we have 🤗.

And during the usual tensions of faalavelave crisis debates, he would allow opinions to flow until he sends that piercing look and with a firm voice says, OK ua lava lega, o le kogu lea.. And so it is, as he has spoken haha.

Many such Samoan uncles are also cool, with a fun side to them; and so it is with my uncle Lucky. Before leaving for New Zealand to take up full time Ministry some decades ago, he was a member of the Apia Hash House Harriers with Tuatagaloa Joe Annandale. I have never asked what his hash name used to be, and I probably shouldn’t 😅😅.

He was also a brilliant rugby player back in the days when Malua Theological College featured a team in the local competition, alongside the late Faitala Talapusi and others. He often laughs and jokes with us.., and our children love him as the ‘cool uncle’.

Lesā Metitilani Alo was born and baptised by uncle Lucky at Te Atatu EFKS, and this son of Samoa with the famous single Alo i Ou Faiva, features his spiritual father, our uncle Lucky, in the music video.

And for many children whose parents were never together for whatever reason, this is the uncle who steps up to fill the gap, with so much love and adoration, that you grow up not even noticing that there is anything wrong with your nuclear family situation 🤗.

If you have been blessed with an uncle like that, we pay tribute to them all and thank God for bringing them into our lives.

As Samoa celebrates this Father’s Day during times of lockdowns and closed borders, it has been hard for so many who cannot travel to be with their dads today.

We say a special prayer for many who have lost their fathers during this past year; especially in the past few months, because you have not been able to travel and be with you Dads, or attend their funerals. We remember you all today.

Happy Father’s Day to all the Dads, Opas, Papas, Grandpas and Uncles of Samoa today.