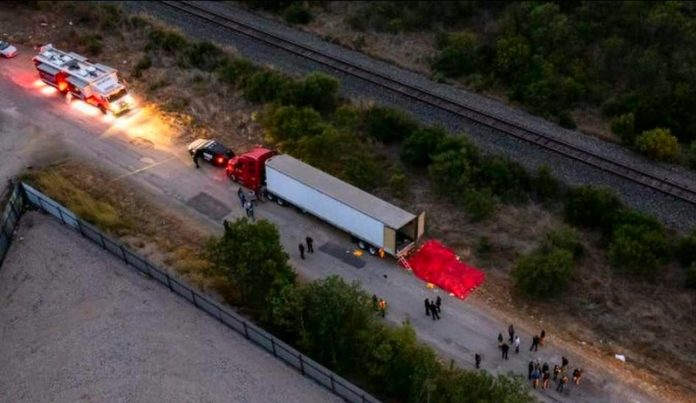 Source: BBC The suspected driver of a truck found abandoned in Texas with dozens of bodies inside has been charged with migrant smuggling resulting in death.

Homero Zamorano was found posing as a migrant in a bush near the lorry in San Antonio and arrested by police.

Some 53 people died in the tragedy, many of heatstroke and dehydration, after being shut inside the truck in blistering heat without any water.

It is the deadliest human trafficking incident in US history.

According to a top Mexican immigration official, the suspected driver, Mr Zamorano – who is from Texas, had “tried to pass himself off as one of the survivors” when he was found by police.

A second suspect, Christian Martinez, was arrested on conspiracy charges. Federal prosecutors say investigators found him after searching through Mr Zamorano’s phone and discovering the pair had been communicating.

The US Justice Department announced that the two men could face a maximum sentence of life in prison, or possibly the death penalty, if convicted.

Two further suspects linked to the address where the truck was registered have also been arrested on firearm offences.

Emergency responders arrived at an isolated road near San Antonio on Monday evening to find 46 dead bodies inside and around the abandoned vehicle, which had its doors flung open.

None of the people inside the truck, which was only found after a nearby worker heard cries for help, were conscious when the responders arrived. According to official radio dispatches from the scene only about a dozen of those found inside the vehicle appeared to be breathing.

The death toll subsequently rose to 53, after a number of those hospitalised died.

A memorial has emerged at the site of the tragedy, around 250km (160 miles) north of the US-Mexico border, and on Wednesday local Texas residents gathered there to mourn.

“All of this breaks my heart because I have family who have been through the same thing,” Veronica Vazquez told AFP news agency.

Another local who himself arrived in the US as an undocumented worker, Roberto Alvarez, came with roses and candles to remember the victims.

“You put yourself a little bit in their place” he said, “because you also lived through it.”

Bottles of water were also left at the site – earlier police said there was no water or air-conditioning on the truck.

Some 27 people, more than half of those identified among the dead, were from Mexico. Another 14 were Hondurans, seven were from Guatemala, and two people from El Salvador also died, Mexico’s government said.

A pair of Guatemalan boys aged 13 and 14 were among those to have perished in the accident, officials from their home country announced on Wednesday.

Pascual Melvin Guachiac and Juan Wilmer Tulul were cousins who left home two weeks ago in order to escape poverty, Pascual’s mother was quoted in Guatemalan media as saying.

On Monday, just hours before the lorry was discovered abandoned, the teenage relatives had told their family that they were headed for San Antonio.

According to Mexican immigration officials the migrants most likely crossed the border in smaller groups before gathering in a secret safe-house inside the US, where they would have been crammed into the lorry for the next stage of their journey.

Those inside the lorry were found sprinkled with a pungent substance, the officials added, as part of a method used by some smugglers to mask the scent of human beings and avoid being detected by canine patrols.