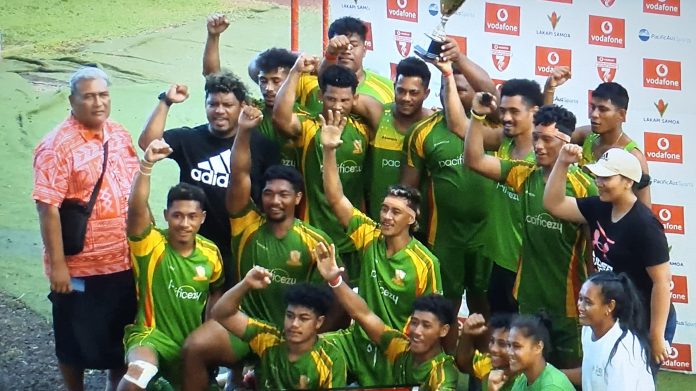 Tepatasi are the champions of Round 2 of the Vodafone National Sevens Series after defeating Vaiala in a dramatic final at Apia Park. 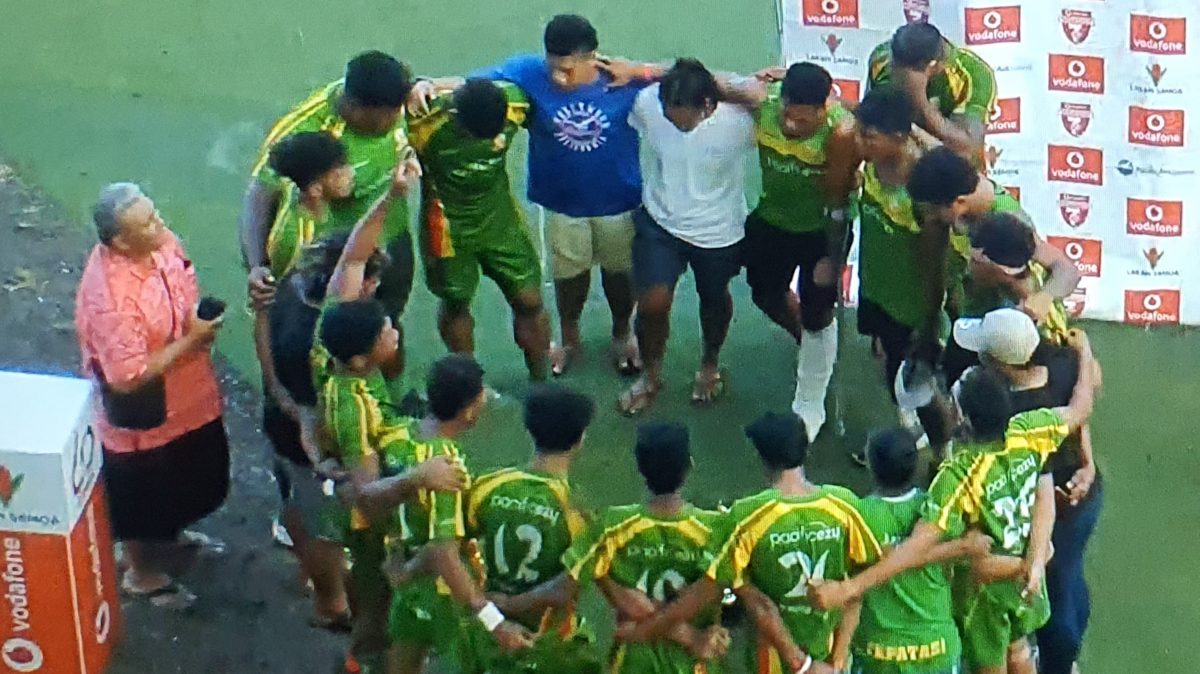 It was Vaiala who put first points on the board after Tepatasi’s first kick-off didn’t reach 10 metres.

Alatasi Tupou took the gifted free-kick restart and passed it to Malo Luteru who side stepped his way through the Tepa defense. A strong carry by Fuli Faafouina gaines territory for Vaiala. A quick ball off the ruck from Captain Extraordinaire Alatasi Tupou to Bitna Tafili and Reupena Poloai was under the post. Luteru converted to give Vaiala a 7-0 early lead.

Tepatasi hit back quickly with a clean lineout ball that went straight to Manu Samoa 7s rep Faafoi Falaniko who seemed to just stride through the Vaiala defense to run 40m and score under the sticks.

Vaiala conceded a penalty on their 22 and Tepatasi’s captain capitalised by taking the scrum.

Tepatasi kept possession for a patient flow of continuous play for close to two minutes until a lift-up tackle by Alatasi Tupou saw another penalty against Blackie inside their 5 metre line.

The referee pulled his yellow card and sent Malu Falaniko off instead.

Tepatasi’s Power Forward Captain Togisia Iafeta Laau tapped and threw his weight behind the ball. He took three Vaiala defenders with him over the try line to put his side in the lead.

With a 12-7 lead Tepa scored one more try before half time. Continuous play for over 3 minutes ended with Namua Iloilo go over to extend Tepatasi’s lead to 19-7 at halftime.

After 3 minutes of continous play with Tepatasi having most of the possession and territory, it was Vaiala that crossed the line to narrow the lead 19-14.

Faafoi was on the attack from scrappy broken play, but passes it back into the hands of Vaiala speedster 19 year old Tafili who ran 80m to the tryline. Malo Luteru conversion took the match to 19-14 with four minutes to go.

With two minutes left on the clock Vaiala’s Malo Luteru was on the attack with a chip and chase when the referee called a high tackle penalty against him.

Tepa lose possession off their own lineout and Vaiala gets a chance with a scrum.

There’s 30 seconds left on the clock when Malu Falaniko pulls a huge step and power runs over for the equaliser, and after a successful conversion Vaiala is ahead 21-19.

Time is up on the clock and spectators from both sides are literally at the edge of their seats. Emotions are running high on and off the field.

As the clock shows time is up, the referee allows the replay.

Vaiala kicks off and the Tepatasi player flying up for the ball is taken in the air and Vaiala concede a penalty.

Tepatasi patiently keep possession until a ruck is formed off a Vaiala tackle and a Vaiala player comes from the side to concede another penalty.

The ref calls a penalty, but then walks back and sends Malo Luteru off for assumably back chatting.

Emotions ran wild as Tepatasi’s Faafoi Falaniko takes full advatage of the situation, by pulling a huge step that breaks through the Vaiala defense.

Player of the Tournament Pelasio Samuelu goes over in the corner to break Vaiala’s hearts and secure the championship for his village and the district of Aleipata.

At a post match interview Tepatasi Captain Togisia Iafeta Laau spoke articulately showing humility as he gave the honour and glory back to God.

“Our strength comes from God,” and we give him all the praise,” said Togisia.

The Coached by Reverend Malo Sefo of the Assembly of God.