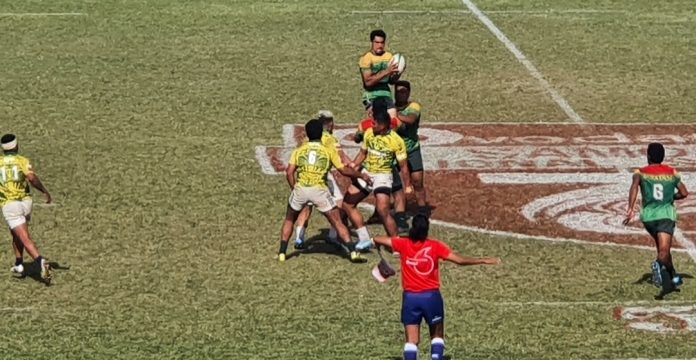 29 Aug 2020 Apia Park. Tepatasi have upset the Taula All stars to set up a highly anticipated Vodafone National 7s final with the Laulii Lions.

Taula All stars scraped their way through to the semi-finals after edging BBE Vaiala in extra time of the quarter-finals.

Tepatasi gave the All Stars no opportunities to score by holding possession of the ball for the majority of the match.

Their star player Vaa Apelu found his way to the try line twice to give Tepatasi a 17-7 lead. Taula All Stars tried their best to put some points on the scoreboard however it was Tepatasi who found themselves under the post in the dying minutes of the game, to close out the match 24-7.

In the other Cup semi-final the in-form Laulii Lions came up against an Apia Maroon Outfit who had just upset Tama Uli in their quarter-final match.

Both teams wasted no time in scoring with Laulii leading 7-5 after four minutes into the match.

A line break by a young superstar by the name of Bright Tapenako set up Laulii’s second try to lead 14-5 at halftime.

The second half became messy as two yellow cards were given after punches were thrown by two of the tournaments best players in Bright Tapenako and Andrew Wulf.

A member of the crowd who ran onto the field and punched the Apia Maroon player was arrested by police.

Lions took full advantage and scored another five pointer to extend their lead to 19-5, proving too far for the Maroons to mount a comeback.

Taula All Stars will play Apia Maroon for 3rd place while Aana Chiefs and BBE Vaiala play off for 5th place.

The results of this final leg will determine the overall standings of the 4 week national comp.