Tepatasi are the Samoa National 7s series Champions after defeating Lauli’i Lions in the Grandfinal leg of the series today at Apia Park stadium.

Lauli’i got off to a hot start when their Manu Samoa representative players Laaloi Leilua and Joe Perez linked up to give their side an early 5-0 lead.

Lion’s lead did not last very long after Vaa Apelu Maliko, an obvious choice for the final round’s best player displayed individual brilliance to beat four Lion’s defenders and score a 60-meter try to level the match 5-5 at halftime.

It was clear that the first team to score in the second half would have the upper hand to run away with the match, and Tepatasi did just that.

Vaa Apelu Maliko was the man again for Tepatasi. He sliced through the Lauli’i defence and then put a kick through to chase.

Laaloi Leilua did well to gather for Laulii however, Maliko forced an error which led to a pick-and-go try by Tepatasi.

Leading 10-5 Tepatasi needed to show some solid defence to win this match as Lauli’i was hot on attack.

With the clock ticking down, Perez busted his way through would-be Tepatasi defenders and looked to offload to Laaloi for a sure try, cheered on by busloads of Laulii fans in the stadium.

However, none other than Vaa Apelu Maliko would come out of nowhere to knock the ball out of Perez’s hands, saving a Laulii try and ensuring a win for Tepatasi that would have the whole Aleipata district celebrating.

The heartbreak was felt by loyal Laulii supporters who had filled the South Stand of Apia Park stadium, cheering like a group of high schoolers at zone athletics.

If you did the math before the final, you would have known that Taula Eels were sitting at 71 points after their 3rd place win. A Tepatasi win would take them to 73, but a loss would leave them with only 70 – one point shy of the overall national championship.

So inevitably the whole of Apia Rugby Union could be excused for wanting a Laaulii win over Tepatasi during the final.

Coached and led by Reverend Malo Sefo, the Tepatasi side are a well managed outfit who showed consistency throughout the 4 week-long competition. Affectionately known as “Rev” in the rugby community, Reverend Malo is the man behind the successes of Tepatasi Rugbt, for both men and women’s teams.

He has been described as the unsung hero of grassroots rugby development in Aleipata and Samoa, and the newly selected national coaches would do well to seek his insights on approaches to bring out the best in Samoa’s youth. 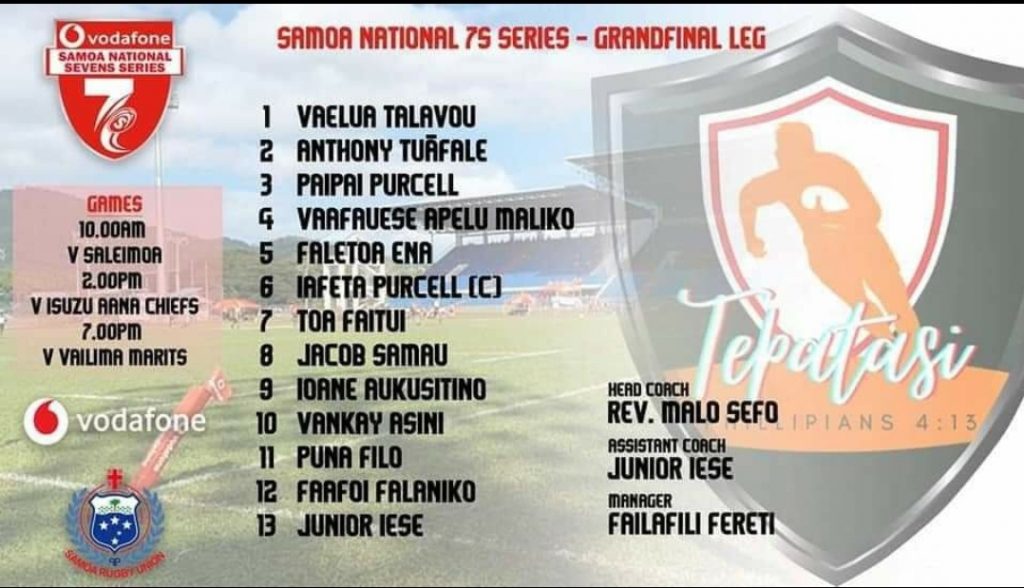 Taula All Stars finished in second place and the brave Laulii Lions were third overall.

For his consistency over the 4 weeks of the comp, Taula Eels Steve Rimoni received Player of the Tournament.