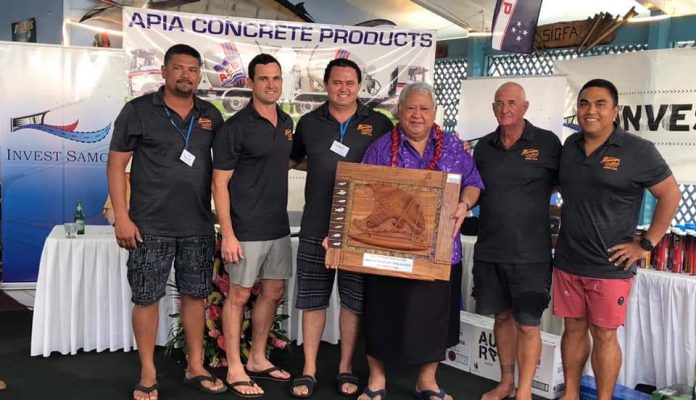 04 May 2019, Apia Samoa. Updated 8am 05 May. Team Stevensons At Manase are the overall winners of the 23rd Samoa International Game Fishing Tournament.

Prime Minister Tuilaepa Dr Sailele Malielegaoi who had officially opened the tournament earlier in the week was also present at the prize giving ceremony to present the winning trophy.

Anthony Sass who had travelled in from Australia to be part of the team says it’s been a great week of fishing ending with the final day which edged them ahead as the overall winners.

“What a week it’s been. Fishing was great and topped it off with an epic last day of the tournament.”

Sass says their team spent the first two days of the tournament playing it safe with a focus on getting points on the board.

“We got a barracuda on Monday at 8.6kgs and another one on Tuesday as well.”

On Day 3 the International Game Fishing Champs decided to target bigger fish for more points and take their boat, Reel Cat, out to the reef.

“Wednesday we headed out West to Apolima and caught four Spanish Mackerel and one Wahoo.”

The team then hit a low before a decision to head back out to Apolima on the last day of the tournament paid off with a triple strike.

“Friday we decided to take a punt and head back to Apolima again. It was very slow fishing, we didn’t catch anything all morning and decided to head back to the reef as we couldn’t find any Marlin or Yellow fin tuna;

“Just before we got to Apolima we had a triple strike of sailfish. It was chaotic on the boat with 3 fish on at the same time.”

The team ended up losing one of the sailfish but managed to tag the other two.

Skipper Ian Maroney and the boat Reel Cat are available for full or half day charters out of Stevensons At Manase.