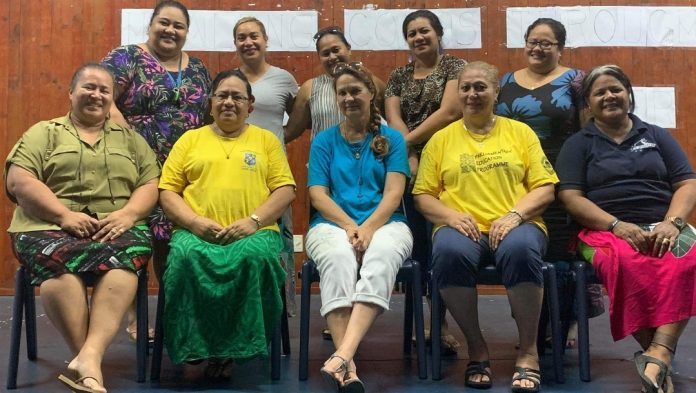 Members of St Mary’s Old Girls Association (SMOGA) who come together as “Team 8” this week to plan for their high school’s 65 year anniversary since it opened in Samoa.

All former students of St Mary’s College are divided into ten teams and to ensure a cross section of generations in each team, you are grouped with those whose entrance year ends with the same digit.

Also from one to ten each team has been named after the school’s former Principals most of them nuns.

Team 8 is named after Sr Losalia Mulipola who was one of SMC’s longest serving principals.

The new Executive to lead Sr Losalia Yellow Team 8 are: Jean Viliamu, Vice President Toi Bawdekar, Treasurer Danita Strickland and Secretary Phaedra Valoia. Mataia Julia Schmidt Solofa has recently stepped down as President of Team 8 to take up a role in the Executive of SMOGA.

The full school Executive will meet monthly to further plan fundraising events in the lead up to the celebrations of the school’s special anniversary.

A week long programme of events is being planned for the end of October until early November, with the main fundraising being a radiothon to be held on the 23rd of October to fund new netball courts for the school.

President of Team 8 –  Jean Viliamu is calling out to all ex students of St Mary’s College to come join in the fun and help to plan for this historic event.

All students whose entrance years end with number 8, are encouraged to please contact one of the Executive members for information on future plans to help celebrate SMC’s 65 years of educating young girls of Samoa.