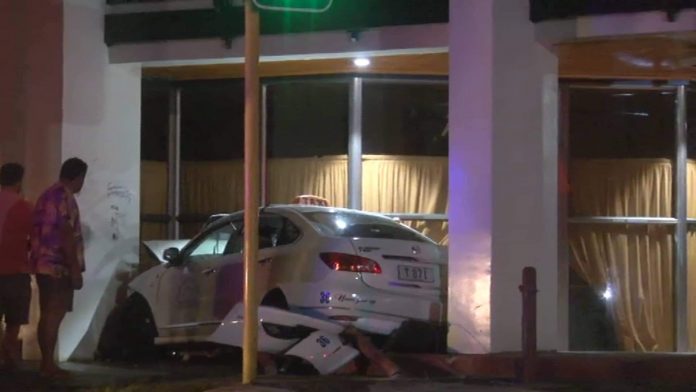 A taxi driver who fell asleep at the wheel drove right into the Ioane Viliamu building just after 5.30am on Saturday morning.

It ruined the weekend for the taxi owners and small business entrepreneurs Brian and Grace Roebeck.

Speaking to Samoa Global News, Mr and Mrs Roebeck said there has been much speculation about the accident because several people filmed the incident soon after the crash and posted it on social media.

The driver was a friend of their son and he is a part time driver who had started his shift at 4pm Friday afternoon.

Mr Roebeck says that he does not let his drivers do more than an 8 hours per shift, and doesn’t allow them on the road past midnight.

But on Friday night they could not get a hold of this driver to return the vehicle and were very disappointed to receive the call on Saturday morning at around 6am that their taxi had been in an accident.

“We saw him taking a passenger at 11pm and he was supposed to hand the taxi back at midnight. We kept calling him at 1am and could not reach him.”

“After 2am my sons gave up looking for him and went home.”

A taxi driver who was behind the vehicle said he suddenly saw the car vear off and drive straight into the John Williams building.

The driver of Mrs Roebeck’s taxi told her that he had his wife in the back seat. She had come with him on his last run to take a passenger and they were returning home to Matautu when he suddenly fell asleep at the wheel.

He told Mrs Roebeck that when his wife yelled out, he woke, but panicked and put his foot onto the accelerator instead of the breaks, causing them to go even faster into the building.

“He came here to apologise but there was nothing to be done, the accident has trashed our car and we are not insured.”

Mrs Roebeck says it was also very disappointing to see members of the public rushing onto the scene to remove parts from the vehicle and steal possessions from inside the taxi.

“Takings of $90 tala and my son’s phone were stolen by people who were first to the scene.”

“We could hear the person who posted live trying to tell people to stop removing things but they kept rushing in to take what they could.”

The Roebecks said the taxi was an important part of their family’s income to complement the hair salon, barber shop and night time barbeques that they have as small business ventures.