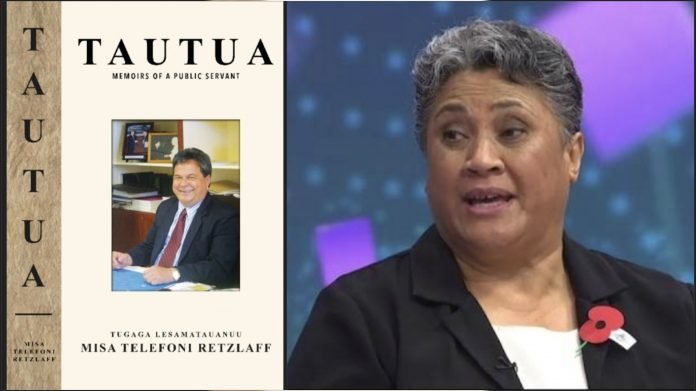 Reverend Aliitasi is a Minister for Methodist Church of NZ and Superintending Chaplain at Wesley College, New Zealand.

“Tautua – Memoirs of a Public Servant” is the latest publication by the author of “Love and Money” and “To Thine Own Self Be True“.

Tautua: The Memoirs of a Public Servant

This book is a heart-rending reflection of Tugaga Lesamatauanu’u Misa Telefoni Retzlaff’s foray into politics, the highlight of which was his time as Deputy Prime Minister of Samoa 2001-2010.

The story is a pleasant read and will resonate with many Samoans who will identify alongside Retzlaff their place within the fabric of this story.

As a King’s College Old Boy and a graduate of Auckland University in Law (Honours), ‘the world was his oyster’ but for this ‘Island Boy’ family and his homeland would dictate a life he never could have imagined.

Samoa’s history over this period, 1988-2011, is also Retzlaff’s history. The two are intertwined and set the backdrop and platform for what was to play out in terms of Samoa as a country on the home front and on the world stage. Retzlaff was in the thick of it at times and sometimes unknowingly.

Retzlaff’s story is not without its struggles and he acknowledges throughout his writing all those who in any way and in many ways, contributed to his time of tautua – service.

Retzlaff was his ‘father’s son’ and while this relationship spoke strongly of his deepest regard and love for his father, there was also an unspoken understanding of expectation and the inherent adherence to that understanding of a son to his father.

Retzlaff’s hopes and aspirations for the next generations of his family and of Samoans generally are synonymous with those of his parents and their parents before them – peace and prosperity for all.

In Retzlaff’s life and times, a time of great learning and coming of age as a Son of Samoa, he remained true to his faith in God’s faithfulness in enabling him to have the time of his life as a public servant.

Lesamatauanuu Tugaga Misa Telefoni was born Hermann Theodore Retzlaff. He became better known by his matai titles as he served the Government of Samoa, first as Attorney General, then as a Member of Parliament before becoming a Minister and Deputy Prime Minister.

Misa’s father was Hermann Paul Retzlaff (Amani Telefoni) – who was the son of a German public servant, Erich Retzlaff, who had been sent to Samoa as a tradesman to install the first telephones on the island. Hence, the name, “Telefoni”.

Misa Telefoni Retzlaff attended primary school at the Marist Brothers in Apia and attended Kings College (Auckland). He was the first student at Kings College to win the prestigious Kelliher Economic Scholarship (nationwide) in 1969.

He graduated Bachelor of Law with Honours LLB (Hons) from Auckland University in 1974 having won a Senior Prize in Law in 1973.

Misa was appointed Attorney General of Samoa in 1986 and held this office until 1988 when he entered Parliament.

In Samoa he studied for and was admitted as a Certified Public Accountant (CPA) in 1977. In 2009 the Samoa Institute of Accountants elevated him and four others – Council of Deputies Tuiloma Pule Lameko, PM Tuilaepa Sailele, Oloipola Terence Betham and Tuliaupupu Pala Lima to ‘Fellow Public Accountant’ (FPA).

Misa Telefoni was Pro-Chancellor of the National University of Samoa (NUS) for 12 years from 1986-1998.

He proudly served as the Member of the Parliament (MP) of the Constituency of Falelatai and Samatau from 1988 until his retirement from politics and the public life in 2011, a service of 33 years.

Misa was appointed to Cabinet in 1992 and was to remain a Cabinet Minister until his retirement in 2011. He has held various Cabinet portfolios including Agriculture and Fisheries, Finance, Health, Trade Commerce and Industry and others.

In 2001 and 2006 he was appointed Deputy Leader of the  Human Rights Protection Party and as such he was Deputy Prime Minister of Samoa for ten years from 2001 – 2011.

Internationally, he was Chairperson of the Pacific Aid Commission and was appointed President in Office of the African Caribbean and Pacific (ACP) in Brussels. He was President pro tem of the World Health Organisation (WHO).

He has published a novel “Love and Money” and also a book of his writings “To Thine Own Self Be True”.  Both of these can be viewed and downloaded on his website www.teleconsult.ws