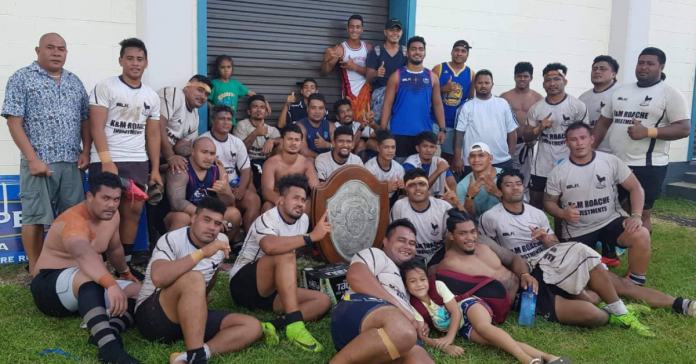 Taumeasina Island Resort Moataa had to work hard to retain the shield they took from SCOPA last weekend, beating Moamoa 32-22 in today’s match at the HPU grounds in Tuanaimato.

With the score at 25-14 a Moamoa forward dropped the ball on the try line, just as the hooter sounded for half time.

TIR Moataa led by 25-14 at half time and came back to secure the win in the second half against a developing SSAB Moamoa side.

SSAB Moamoa head coach Tualoina Gustav Slade said that he was happy with the commitment and performance of his young side despite unforced errors which cost them the match.

“Our game plan worked well and that led to our 3 tries. We also missed a few kicks for goal which is crucial in a match against an experienced team like Moataa;

“This is a developing side and to know that we can now compete to the level of the Apia Union is a great achievement for our players; we look forward to next year”.

Moamoa is one of the rugby clubs that made the move away from Apia West Union last year, and again returned to join the Apia Rugby Union this year.

President of Ulalei Brisbane, Faalafi Pa Enari was present at the match and presented the shield to the Moataa captain.