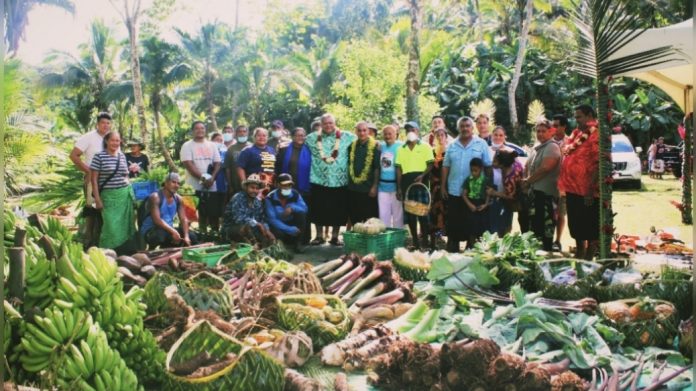 29 April 2022, Apia Samoa. The village of Tapatapao hosted their first ever Talomua earlier this week.  The farmers of the village and people from the neighboring villages came to witness the display of a variety of root crops, vegetables, fruits as well as tilapia and freshwater eels farmed in the nearby freshwater ponds.

The Tapatapao Talomua was organized and coordinated by one of the local farmers of Tapatapao, Mr. Fausa Sugalu Pasia. This event was supposed to take place a few weeks ago but was delayed due to the Covid-19 nationwide lockdown.

The farmers’ representative Mrs. Fulu Maselina Nauer, took the opportunity to relay their request to the government for assistance in order to improve electricity and the phone network coverage for some parts of the village.

The Minister of Agriculture and Fisheries, Honourable La’aulialemalietoa Leuatea Polataivao Fosi Schmidt, congratulated the organisers and and expressed his appreciation of the farmers and fishers’ efforts in organising a successful event, and assured them that the collaboration between the Government and the Tapatapao village will continue for their community developments.

The village gifted a variety of agricultural produce for the Minister as a token of their
appreciation.

Fresh produce from the Talomua were packed and taken from Tapatapao to be donated to elders at Mapuifagalele, as well as the Carmelite sisters at Vailima.

The Ministry provided five hundred seedlings of coconut and fruit trees, packets of vegetable seeds as well as some farming tools and equipment for the farmers of Tapatapao.