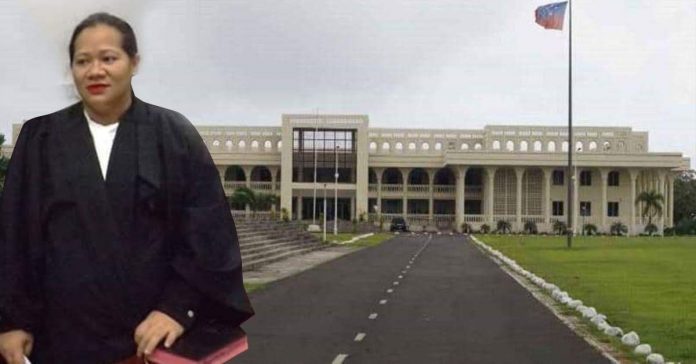 16 February 2019 Apia Samoa. Commercial farmer Peter Tulaga is the man accused of the alleged attempted murder of a woman that prosecution submissions reveal was stabbed before being shot in the face.

Prosecution insisted during a bail hearing earlier this week that Tulaga would tamper with evidence and threaten witnesses if he were released to await a Court trial.

Leone Sua-Mailo submitted in Court before Justice Tafaoimalo Leilani Tuala-Warren that the defendant had tampered with evidence including the murder weapon which according to Sua-Mailo is still missing.

Leota told the court during her submission, that the defendant put the gun at the back of his landcruiser after the alleged incident occurred, and drove to Aleisa where his farm is.

“Your honour my instructions are, the gun must have fallen out of his landcruiser while on his way to Aleisa because the road to his farm is very rough,” Leota told the court.

Sua-Mailo told the Court the submission by defense counsel is not plausible.

“This intention by the defendant is not plausible on the fact that if the gun had been put behind his landcruiser which was placed flatly at the back of the car then no matter how fast or furious the driver drives a landcruiser, the gun could not have fallen off unless the car turns over.

“Therefore the explanation provided by the defendant as to how the gun could have become lost or removed from his possession is not plausible and the only reasonable conclusion that the Court can draw from these circumstances is that either the defendant still has possession of this shot gun or he is hiding this gun somewhere, and he is aware of its whereabouts.”

Leone said the defendant owned several guns but could not say how many when Justice Tafaoimalo had asked if she had the exact number of guns registered under the defendant’s name.

“The affidavit of the Investigating Officer refers to guns being registered under the name of the defendant but there is no exact number,” she said.

Justice Tafaoimalo then questioned prosecution to confirm whether there were any guns found to which Leone confirmed that only one gun was handed over to the police.

“I’m aware that only one gun was handed over to the police but the gun that was used in the commission of this offense has bot been found,” said prosecution.

Prosecution further submitted that Tulaga’s family had cleaned out the crime scene before police had arrived, burning blood-stained sheets and pillows.

The submissions of defense counsel Leota Tima Leavai told the Court that the family of the defendant had cleaned out everything because it was their mother’s house and she was due back from Savaii the next morning.

She explained that the family had gathered the bloodied sheets and pillows and put them inside black rubbish bags before the police arrived.

She added that it was the police who told Tulaga’s family to burn the sheets after they had gone through them.

“The police told the family to bring the black rubbish bags that they had put away,” said Leota.

“The family brought the plastic bags to the police. They looked through the bags and then they told the family to burn them.”

However, prosecution Leone Su’a-Mailo rejected defense counsel’s explanations on behalf of her client.

“The facts remains that the family could have waited until the police had conducted their investigation before they clean up the house,” she said,

“Within only two hours from the time of the commission of this offense the house was already cleaned up by the time the police arrived at the scene.

The matter has been adjourned to the 19th of February for Justice Tafaoimalo to deliver her decision regarding bail.