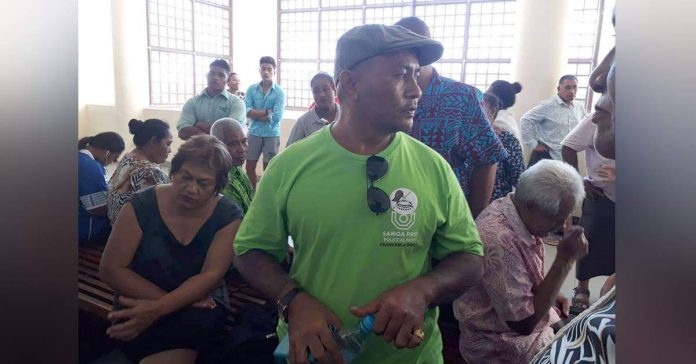 12 March 2019, Mulinuu Apia Samoa.  Talalelei Pauga who refers to himself as “Ninja” pleaded not guilty to one charge of making a false declaration on his arrival form when he returned to Samoa on 19th January 2019.

Judge Leota Raymond Schuster then ordered Pauga to surrender his passport to the Court adding that he was not permitted to leave the Court house at Mulinuu until his passport was handed in.

This caused a contentious issue with his lawyer Unasa Iuni Sapolu who told the Court there was no need to surrender her client’s passport, giving her own personal assurance that his client would show up on the day of his trial, set for the 17th of May for hearing.

“This must be the first time ever someone is charged with false declaration on an arrival card, and so this is further restriction if he were to be subjected to bail as well surrendering his passport,” argued Unasa.

“Your honour I respectfully seek that he will be at liberty, he will turn up for his trial and he is based on the Island of Manono;

“He has no previous convictions in this country and this is just a minor matter which no one in our resident has ever been charged with,” Unasa told the Court.

She then formally submitted that her client be on bail and not surrender his passport, adding that she would have an application for bail variation today.

“We will file another application for variation of his bail to allow him to leave jurisdiction;

“We can file that application before the end of today.”

Judge Leota reminded defense counsel that surrendering passports is a usual condition of the Court, particularly for defendants residing overseas.

“Ms. Sapolu your client is still at liberty and all that is required of him is to surrender his passport,” said Judge Leota.

“If he does wish to travel then he needs to submit his specific dates of travel and he can do that any time;

“That is available to any defendant whose passport is required to be surrendered;

“It is not a restriction it is the condition of the Court particularly for defendants who reside permanently overseas.”

“The matter is adjourned to the 17th of May for hearing and the defendant was not allowed to leave the court premises until his passport was surrendered.

Outside the Court, Unasa and SSIG members including Vui Sione filmed a facebook live post where Unasa said, “Now there is someone taking the boat across to Manono Tai so he can get the passport and then get on the bus to come here;

Referring to the Court conditions, Unasa said that this was a disadvantage to people in the rural areas.