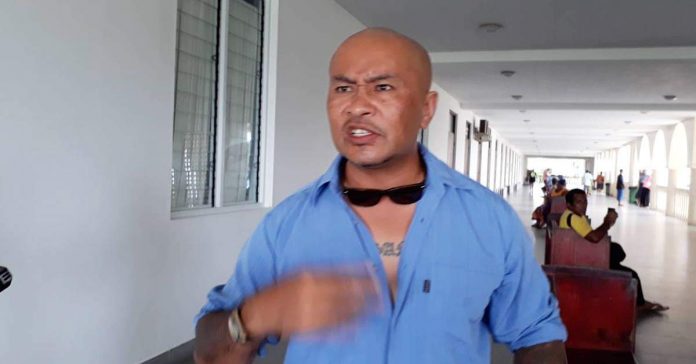 08 February 2019, Apia Samoa. The man responsible for throwing a pig’s head and dog food as well as uttering swear words towards the Prime Minister of Samoa last year during an event that was held in Brisbane, Australia says his actions was as a political approach.

Tala Pauga who is in the country to face the village of Manono about the incident which went viral on social media says that in his opinion, his approach was “on the political level.”

“The reason why I used dog food and pig’s head is because he (Tuilaepa) calls the people of my country pua’a elo, maile and all that – so I thought I would give it right back to him.”

“I said to myself if he does not have any respect for my people then why should I respect him as the Prime Minister of my country.”

Referring to Samoa repeatedly as “his country” and “his people,” Pauga continued, “I don’t want him to rule my country and its people as a dictator, because the way I see it – whatever he says goes and nobody has a say in that.”

However, when asked if he was a tax payer here in Samoa, Pauga exclaimed, “No. I am not a citizen of this country!”

Pauga added he wanted to make sure his voice was heard loud and clear and he wanted the Prime Minister’s attention because according to him, Tuilaepa had to listen to what the people of Samoa had to say.

“I’ve never heard a leader of any country speak to the people of his country like that and calling them names.

“Tuilaepa doesn’t take advice from anyone and has no respect for the country and its people.”

Asked if he regret what he did Tala said no.

“I am actually proud of what I did and I told everyone that as well as the other media who contacted me for a comment.”

Asked if he would speak directly with the Prime Minister to air his strong views, Pauga said,  “I would love to sit down and have a one on one with him, but I don’t know where to find him and that’s the problem.

“If he gives me the opportunity I would love to talk to him and explain to him why I did what I did and my thoughts.”