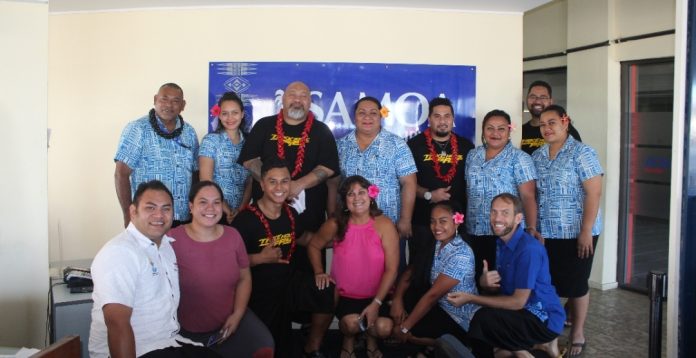 13 September 2019, Apia, Samoa – The cast and crew of the much anticipated action-comedy film, Take Home Pay, were given a warm welcome by the management and staff of Samoa Airways at the travel centre earlier this week.

In his welcome comments, the General Manager Commercial for Samoa Airways, Robert Rounds congratulated the Director, Cast and Crew for the hard work and determination that went into putting Samoan stories on the big screen.

“Samoa Airways is proud to get behind these talented young Samoan filmmakers and actors who have once again broken barriers in the mainstream film industry by creating quality films featuring our Pacific stories.” said Rounds

“We want to acknowledge your hard work and persistence in bringing your artistic vision to life in this self-funded independent film that promotes our country to the world;

“Congratulations on an already successful campaign in New Zealand and we are looking forward to being entertained and celebrating this much anticipated film here in Samoa.”

The action-comedy film features scenes of the Faleolo International Airport and the Samoa Airways aircraft which Director, Stallone, Vaiaoga-Ioasa said was intended to provoke a sense of pride and nostalgia from Samoan audiences all over the world

“It makes so much sense to the story that you see the workers leaving Samoa on Samoa Airways” said Vaiaoga- Ioasa “there is a sense of pride – it’s the peoples’ airline and featuring the aircraft in the film was the most efficient way to bring about big ideas, big emotions and big feelings from the audience”

“I think people are really surprised because you never expect to see a place that’s familiar to everyone in Samoa on the big screen and it sets in the realisation that anything is possible. “

Vaiaoga – Ioasa added that film-making is a risky industry to be in and there are no guarantees in following your passion especially when it focusses on telling stories based on the Samoan experience.

“This is our third self-funded independently made film so having commercial partners, especially Samoa through Samoa Tourism and Samoa Airways, is really essential to help make these films possible.”

The visit gave the Samoa Airways staff and their customers a chance to meet, greet and take pictures with the Take Home Pay stars before the official red carpet premiere at Apollo cinemas that same evening.