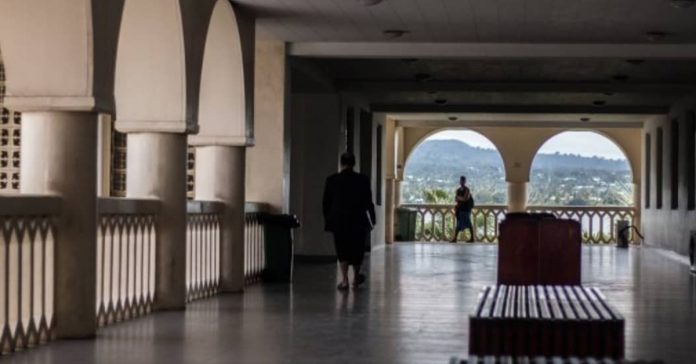 7 March, 2019. Mulinuu Samoa – The hearing for notorious criminal Tagaloasa Filipaina and Ovaleni Poli, fighting to be transferred back to Tafaigata Prison from the Apia Police Station, has been adjourned for the second time.

The matter was called before Justice Tafaoimalo Leilani Tuala-Warren this week, however, respondent Sefo Ainuu had made an application to the Court for the matter to be adjourned because they had only just received submissions by defense counsel Unasa Iuni Sapolu.

Aiunuu told the Court that they would need at least three days to go through the submissions presented by defense counsel.

“Your honour, we filed our submissions on the 21st of January, however, defense had just served us this morning with her submission so we need time to go through the submissions,” said Mr. Ainuu.

Justice Tafaoimalo then adjourned the matter to the 14th of March 2019.

Filipaina and relative Ovaleni Poli Viali, were moved from the Tafaigata prison to the Apia police cells last February for allegedly masterminding an aborted mass prison breakout as Samoa braced itself for the approach of Cyclone Gita in February last year.

A month earlier the well known drug Lord who is serving a life sentence for the murder of a police officer was released to attend his matai bestowal ceremony.

Tagaloasa was once released on parole in the early 2000s after serving more than 10 years of a murder conviction, but was soon returned to jail after he was found guilty of a second murder and drug offences. He has since been refused parole on five occasions.

Prison authorities confirm that Filipaina was being held in a special section of the Tafaigata prison reserved for those considered high risk of flight and posing danger to others.

The Apia Police Station has been declared an official prison by Minister of Prisons and Rehabilitation Services Tialavea Leniu Tionisio Hunt.

Outside of Court Unasa told Samoa Global News that it had been 12 months since Tagaloasa “Filipaina” and Ovaleni have been detained in Apia and they should be allowed to go back to Tafaigata Prison.

“We are trying to develop the rights of the prisoners and besides Tagaloasa and Ovaleni have been sitting in there for 12 months,” she said.

“You know in any other country they will look at it as an abuse of human rights.

“We will ask the court for compensation for Tagaloasa and Ovaleni as well as this case took a heck of a lot of time,” said Unasa.