The village of Tafatafa performed a traditional apology (ifoga) to the village of Lotofaga on Saturday morning, to apologise for the death of a young man, 26, who had died from machete wounds to his neck in a tragic incident where a 51 year old male attacked three men from Lotofaga who had stayed the night at the popular Tafatafa beach fales last weekend. There were altogether five men from Lotofaga involved in the Sunday afternoon incident, that left one dead, and two recovering in hospital with machete wounds. Lotofaga is the village of Samoa’s Prime Minister, Hon Fiame Naomi Mataafa.

Samoa Global News were on site in Lotofaga, at just after 7am on Saturday morning, when car loads of matai and villagers from Tafatafa arrived at the compound of the EFKS Congregational Christian Church.  Soon after this, Prime Minister Fiame Naomi Mataafa arrived. As is required by the traditional apology, four elderly matai from Tafatafa village then sat under a large fine mat that covered them completely, while two Tafatafa church ministers sat infront of them. The two clergymen were Tolei’u Tolei’u of the Methodist church, and Bishop Leapaga Tiputa Apinati of the Church of Jesus Christ of Latter Day Saints.

Orators from Lotofaga, Siitagata and Lemauga were then seen walking over to remove the ietoga; a sign of acceptance of the traditional apology.  The clergymen and matai of Tafatafa village were then asked to come into the church hall, where traditional speeches and cultural exchanges took place.

Leapaga Eteuati spoke on behalf of Tafatafa village. He thanked Lotofaga for their hearts to easily accept their apology, and to the Sa’o Faapito Fiame Naomi for her role in the reconciliation process. The main concern for them, as conveyed by the orator, is to maintain peace and avoid any retaliation, or ongoing violence stemming from the incident.

The Lotofaga response was conveyed by Siitagata Aifoi, who thanked the villagers of Tafatafa for taking the cultural route to reconciliation. He, too, apologised to Tafatafa, for any behaviour of their youth while on Tafatafa sacred land, that may have caused offence, especially on a Sunday, when the incident occurred. He called for the spirit of forgiveness and reconciliation.

A cultural exchange followed where Leapaga Eteuati voiced the various gifts prepared by Tafatafa for Lotofaga. $2,000 tala was tagged for high chiefs of the village, while $5,000 was handed over for orator chiefs (faleupolu). An ietoga and gift was set aside for the Prime Minister. Church ministers of Lotofaga and the lead orator the day, Siitagata Aifoi, also received lafo by way of cash. 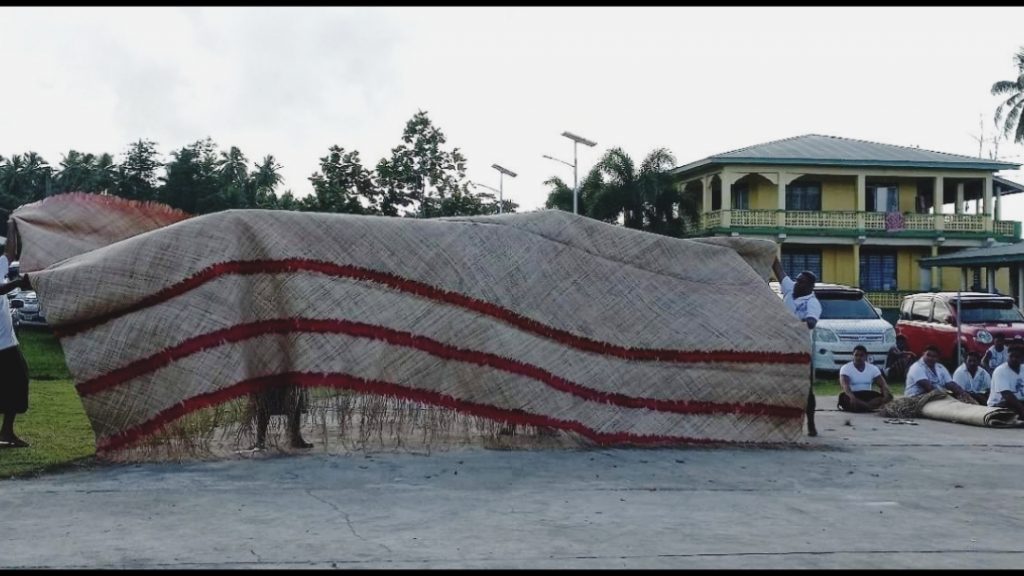 Siitagata spoke again to thank Tafatafa, and reciprocated the gifts with a faaaloaloga of 30 pusa apa, and $3,000 tala for the villagers’ fare back (pasese).  Church ministers from Tafatafa as well as all the high chiefs present also received a lafo by way of cash. The lead orator Leapaga Eteuati received $500.  Tafatafa honoured the faaaloaloga and received it, however, they returned $2,000 tala of the pasese money.

The two villages sang a hymn together, and after a prayer, shook hands and greeted one another in the spirit of reconciliation.

In an interview with the family of the deceased, his guardian father, Po’e Apulu Fesolai Filifili said he and his children, and especially his wife, were still in deep mourning for his son, Jay, killed on the week of his 26th birthday. He said his son was a difficult boy, adopted as their own when his mother left for New Zealand many years ago. Jay’s biologicial mother is Poe’s wife’s sister. Po’e said he and his wife loved Jay as their own, and he was brought up as a younger brother to their children. “His older brothers loved him, and they are struggling to find solace”.

Healthcare workers who received the body of the dead boy say the laceration to his neck was severe and almost decapitated him.

“We love and miss our boy. It was his birthday yesterday, and it is hard for us as parents to lose a child. When I was told of the incident and the way my son had been killed, I called all my children and my family together. I gathered them around and told them, do not retaliate, under no circumstance should any of you retaliate,” said Po’e. His wife sat next to him, crying the entire time he spoke.

“I told my sons, do not go to the event taking place this morning. I know my sons are still hurting and they may not be able to control themselves. So I told them that it is best we stay away. Whatever our village decides, that is what we accept,” said the grieving father.