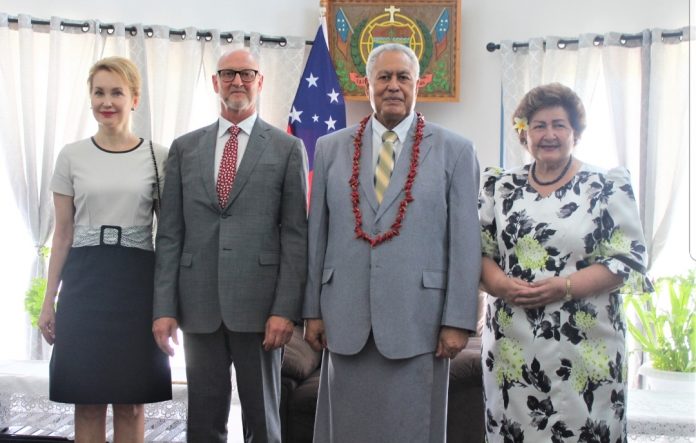 During a Credentials Ceremony held at the Office of the Head of State in Vailele this morning, Switzerland’s Ambassador to Samoa confirned that Switzerland is assisting Samoa to establish a permanent mission in Geneva.

Geneva hosts the European seat of the United Nations as well as the World Trade Organisation which Samoa joined in May 2012.

H.E. Mr. Michael Winzap arrived in Apia Sunday night to present his Letters of Credence to the Head of State, His Highness, Tuimalealiifano Vaaletoa Sualauvi II.

In his remarks during the Ceremony, Switzerland’s Ambassador to Samoa gave his assurance that Switzerland would continue to strengthen relations with Samoa, with future projects that would benefit the People of Samoa.

“Small nations cannot rely on their limited power alone. A strong international system of cooperation based on the rule of law is essential to their wellbeing;

“Switzerland is therefore assisting Samoa in establishing a permanent mission in Geneva”.

He highlighted common interests between the two nations in relation to democracy, traditions and the preservation of the natural environment, noting that there are Swiss nationals who live in Samoa.

“Both Samoa and Swtizerland are small nations attached to their independence; a few Swiss citizens have made your beautiful country their permanent home”.

His Highness accepted Ambassador Michael Winzap’s letters of credence and welcomed him to Samoa.

The Head of State conveyed Samoa’s recognition of the Swiss government’s role in assisting with projects to combat the effects of climate change within the Pacific.

Since Samoa established diplomatic relations with Switzerland in 1981, both countries have continued to work alongside each other through close collaboration on issues of mutual interest and concern at the United Nations.

“Samoa’s joining of the World Trade organization has been a pivotal moment to the Samoan government and we will look forward to the future establishment of our resident mission in Geneva to strengthen relations and provide fruitful opportunities”, said HH Tuimalealiifano Vaaletoa Sualauvi II.

Ambassador Winzap resides in Wellington and was accompanied by his wife and the Swiss honorary consul in Samoa at the Credentials Ceremony.

Michael Winzap was born in Falera, canton of Grison, Switzerland in 1957. He attended Concordia University, Montreal in Canada and graduated with a degree in Political Science.

He has also served in the Middle East as Consullar and Deputy head of Mission in Saudi Arabia in 2000 and Head of the Liaison Office in Baghdad, Iraq in 2006. Later in 2008 Mr. Winzap served as Deputy Head of the Human Security Division.

In 2010 Mr. Winzap was appointed Ambassador and Special Representative for Sudan, South Sudan and the Horn of Africa. He contiued his carrer in the Middle East as the Ambassador of Switzerland to the Kingdom of Jordan and to the Republic of Iraq from 2012-2015.

After serving as Ambassador in the Middle East to the Kingdom of Jordan and the Republic of Iraq, Mr. Winzap took post as Ambassdor of Switzerland to Malaysia in 2015.

Recently, In December 2018 the Swiss Federal Council appointed Mr. Winzap as the Ambassador of Switzerland to New Zealand accredited to other Pacific Islands including the Independent State of Samoa.