28 June 2021, Apia Samoa. The Supreme Court has declared the swearing in ceremony held under a tent on Parliament grounds on Monday 24th May 2021 as unlawful and therefore void, however, the same judgment sets down an order directing Parliament to convene within 7 days.

The Faatuatua i Le Atua Samoa ua Tasi (FAST) Party on the basis that Parliament should convene within 45 days of a general election, and following a Supreme Court order directing Parliament to convene as proclaimed by the Head of State; conducted a swearing-in ceremony under tents on the grounds of Parliament. The Attorney General filed an application seeking the Court to declare the swearing-in as unlawful.

The decision, handed down by Vui Clarence Nelson on behalf of a three-judge panel with Justice Lesatele Rapi Vaai and Justice Fepuleai Ameperosa Roma, affirms the validity of the proclamation by the Head of State dated 20th May 2021 to convene Parliament.

“We are mindful however that there may be ongoing efforts to obstruct the convening of Parliament as the Head of State set down in his proclamation of 20th May 2021”, declared Justice Vui Nelson to a packed courtroom this afternoon.

In its decision the Supreme Court sets down further orders “deemed necessary in the circumstances” as it directs Parliament to convene “without further delay or procrastination”.

“The Applicant (Attorney General) is to advise the Clerk of the Legislative Assembly and all relevant parties and relevant actors as the case may be, to convene the Parliament of Samoa within 7 days”, states the judgment.

The Court leaves no opportunity for the ongoing political impasse between HRPP and FAST to continue, as it then goes on to set out the repercussions of Parliament not convening.

If Parliament does not convene as ordered, the Court made it clear that they would then reconsider the Doctrine of Necessity and whether the tent swearing-in can be used.

The judgment further reminds the Attorney General that “any attempts to undermine” the Supreme Court orders would be considered a contempt of Court, contempt of Head of State orders, and contempt of  Parliament under Standing Order 85 as quoted by Justice Vui.

“Failure to convene Parliament in accordance with above in our opinion, would justify the Court to revisit the Doctrine of Necessity and whether the doctrine would require to be invoked, and whether then, the tent swearing-in can be used”, stated Justice Vui.

The Head of State His Highness Tuimalealiifano Vaaletoa Sualauvi II suspended the sitting of Parliament less than 48 hours after the Proclamation of 20th May was issued.

At about 9pm on Saturday 22 May 2021, a second warrant was issued by the Head of State suspending the opening of Parliament “until such time as to be announced and for reasons I will make known in due course “. 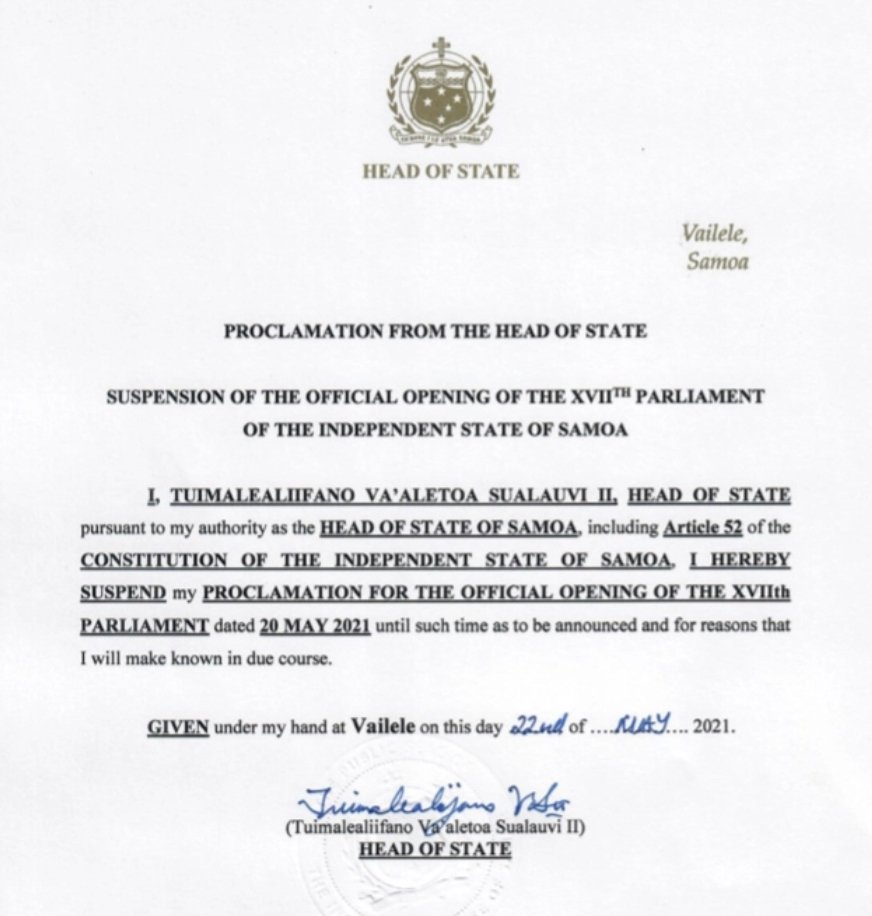 The events triggered a special sitting of the Supreme Court on Sunday 23 June 2021 where the May 20th proclamation was upheld by the Court, while also declaring the proclamation suspending Parliament unlawful.

The Supreme Court states, “the convening of the Legislative Assembly cannot be left until someone decides that it is time for Parliament to meet, whenever that may be“.

The Court highlighted the lack of transparency in presenting no basis or offering any explanation as to why Parliament was being suspended.

Outside Court FAST party Chairman Laaulialemalietoa said if this is a decision that will being peace over Samoa then that is from God and FAST accepts the judgment. In a press statement FAST leader Fiame Naomi Mataafa said she was happy with the decision, to direct Parliament to convene adding it was now up to the Caretaker government to organise as the Court has directed.

In the meantime election petitions continue to be heard in Court. So far only one MP has his lost seat – Afioga Seiuli Ueligitone Seiuli of Malie was found guilty of bribery by the Supreme Court last week.

In Court today a senior member of HRPP Tafua Maluelue Tafua has not backed down from his election petition against HRPP’s Fiumalu Eteuati Eteuati.