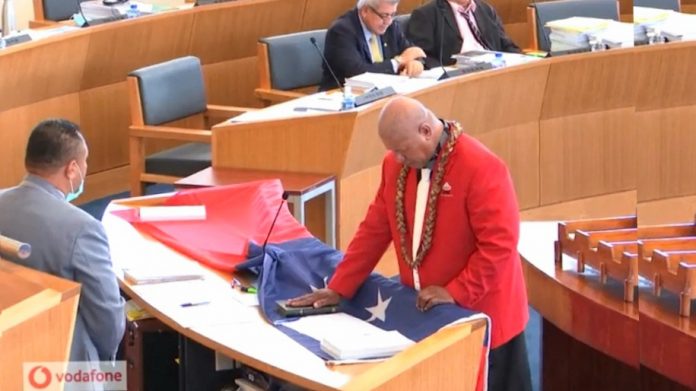 The swearing-in of the new Member of Parliament for Gagaifomauga No 2, Foisala Lilo Tuu Ioane, was held at the Maota Fono on Tuesday morning 21 June 2022 in a special sitting attended by his family, friends and constituency.

The Speaker announced that under 84(2) of the Electoral Act, the Head of State has issued a warrant dated 04 June 2022, for the appointment of Foisala Lilo Tuu Ioane as a Member of the Parliament of Samoa.

The deputy leader of the Human Right Protection Party HRPP Hon Lauofo Fonotoe Nuafesili Pierre took the floor to welcome the MP. Fonotoe said striving to be in Parliament was not an easy path.

“You have fought the battle and won”

Foisala Lilo Tuu Ioane greeted everyone and delivered a warm welcome speech on his first day in the Parliament. He acknowledged the constituency’s late MP Hon Vaele Paiaaua Sekuini who passed away unexpectedly in March this year. He thanked the late Vaele for his good service and for all that he had done for Gagaifomauga No 2.

Foisala Lilo Ioane ran the by-election as an Independent candidate, however, he joined the ruling FAST party and was officially welcomed at a traditional ceremony earlier this week.

He has the Gagaifomauga No2 by-election with a 61-vote margin over second placed Human Rights Protection Party candidate, Sooalo Poka.