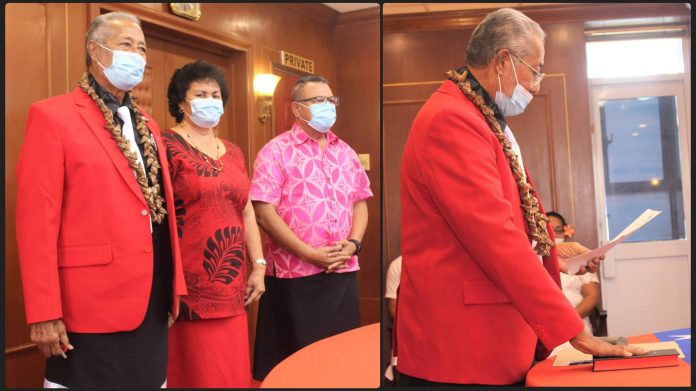 27 April 2022, Apia Samoa.  Hon Tagaloatele Pasi Poloa was this morning finally sworn in as Associate Minister for Commerce, Industry and Labour (MCIL) in a special ceremony held in Cabinet Chambers.

The FAST Member of Parliament who secured the Sagaga 4 seat at the November by-election was not assigned a portfolio when the other four MPs were sworn-in February of this year, as he was in New Zealand on medical treatment at the time.

The additional Associate Minister appointments came after FAST secured five additional Parliamentary seats; winning four out of the 6 by-elections held in November, plus the Falealupo seat won through an eligibility challenge in the Supreme Court.

During the Prime Minister Fiame Naomi Mataafa’s keynote address via Government of Samoa socials today, Hon Fiame Naomi Mataafa gave thanks to God, and congratulated the newly sworn-in Associate Minister and stressed the important role they play in support of Cabinet Ministers.

The Prime Minister reiterated that Associate Minister roles and appointments were a collective decision by Cabinet, and some Ministries are assigned two given the extensive portfolios held by Ministers, such as the Minister of MCIL, also responsible for MPE, or all State Owned Enterprises in Samoa.

Addressing the new Associate Minister, Fiame said the appointment to assist the work of MCIL was timely, given the many legislations being enforced under the Ministry, as well as the move to re-negotiate and review the seasonal worker programme, also under MCIL.

The Prime Minister said there was no doubt the Associate Minister had the knowledge, skill and experience to take up the role and offer advice and support to this Ministry.

The Ministry of Commerce Industry and Labour oversees 24 pieces of legislation, and 7 Regulations. In addition to coordinating the Seasonal Workers and RSE schemes, it also overlooks Employment Services, Consumer Protection, Business Registrations and Intellectual Property. It is also the Ministry working closely with Private Sector Organisations in Investment Promotion and Industry Development.