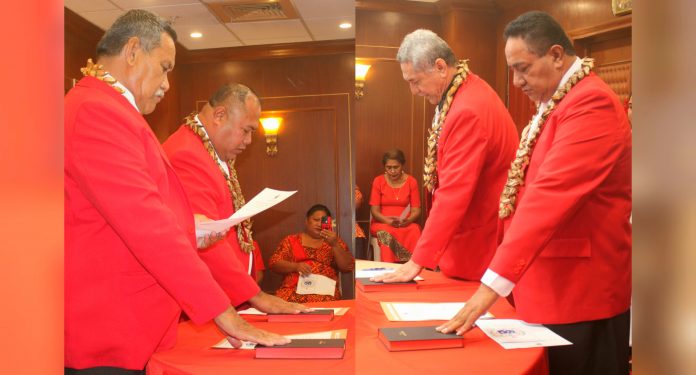 22 February 2022, Apia Samoa. Four out of five new FAST MPs were sworn-in this morning as Associate Ministers, in a ceremony held in Cabinet Chambers before Prime Minister Hon Fiame Naomi Mataafa and Cabinet.

The appointments come after FAST secured five additional Parliamentary seats; wnning four out of the 6 by-elections held in November, plus the Falealupo seat won through an eligibility challenge in the Supreme Court.

The fifth FAST MP who secured the Sagaga 4 seat at the November by-election, Hon Tagaloatele Pasi Poloa was not assigned a portfolio, as he is currently in New Zealand on medical treatment.

The Prime Minister touched on the distribution of Associate Ministers with the larger Ministries such as MAF and MWTI now having two each.

The Prime said the demands of these portfolios and the workload for Ministers has necessitated the additional Associates assigned.

The Ministry of Agriculture and Fisheries includes SROS or the Scientific Research Organisation of Samoa. The Ministry of Works, Transport and Infrastructure includes all the major State Owned Enterprises such as EPC, SWA, Samoa Airport Authority, Samoa Shipping Corporation and others.

Prime Minister Fiame Naomi encouraged the new Associate Ministers to strive in serving the country and supporting government to roll out it’s programs efficiently and effectively.

“Each individual is unique and gifted with God-given talents and I urge you to use those talents to benefit our country”.

Fiame told the new members that joining Cabinet as Associate Ministers elevates their duties and obligations to thinking outside of their hats as Members of Parliament, to Cabinet Members who serve the whole of Samoa.