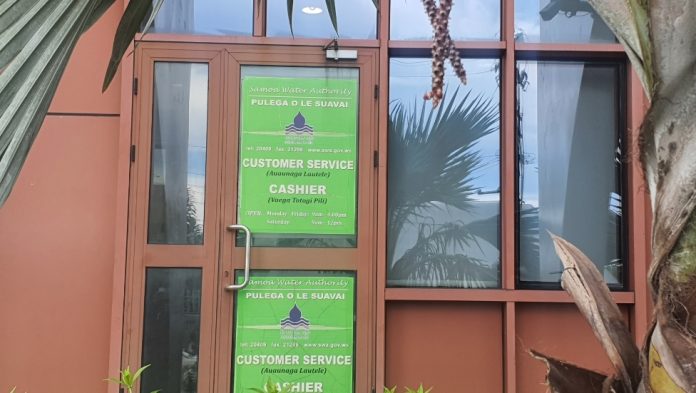 A former employee of the Samoa Water Authority is denying a charge of “assault with intent to commit sexual violation” against a work colleague.

The hearing for alleged acts of sexual harassment at the Samoa Water Authority’s offices at the TATTE building proceeded yesterday morning in the Supreme Court before Acting Chief Justice Mata Keli Tuatagaloa.

Taking the stand, the victim was in tears as she recalled the alleged incident where she says Vitale came to her office while she was working after hours and violated her.

“I was the only one working after hours on the day of the incident, Pili and the other two male workers had left at about 6pm that evening;

“I was shocked to see him (defendant) return to the office”.

Mrs Puipuia said she knew Vitale well as a work colleague, and he struck up a conversation with her that evening.

“He asked me how I thought girls would be turned on (na fesili mai ia au poo a ni auala e turn on ai teine) and I told him I don’t know it depends on what a girl wants”, Saitilofia testified.

She told the Court the defendant asked her what turned her on, and she replied in Samoan, “o au a ia o le papatua.”

She said her phone rang. She answered it and talked for about five to six minutes.

The victim said she didn’t think Pili could do anything towards her because she knew the defendant as a respectful employee, and they had worked together for 8 years.

The victim said while she was trying to finish her work on the computer, she felt Pili touching her back.

“I told him to stop but he continued by inserting his hand into my panty and touched by butt,” she said crying.

“I stood up, trying to make him stop, and that’s when he walked away.”

She said he tried again as she tried to save her work on the computer, Pili walked back to her desk and leaned towards her. He tried touching her vagina by inserting his hand into her skirt and panty.

“I told him to stop but he told her not to worry, that he wouldn’t tell anybody if they had sex.

She said she pushed him away and just sat there crying, in shock of what the defendant had done to her.

The defendant, however, is denying the allegations saying he and Saitilofia were in a secret relationship.

He told the Court “Sa” (victim) agreed with what he had done, and he was only playing with the victim.

He said the reason why he went back to the office on that evening was because he wanted to use the restroom.

After using the toilet he said he then had a conversation with Sa who was still working at the time.

The defendant said Sa told him their Mothers Day treat was very nice, and their conversation went on from there.

According to the defendant, their conversation turned ugly when he tried to rub Sa’s back, and moved his hands to her leg.

Seemingly oblivious to boundaries, Vitale tells the Court that, “Sa suddenly refused and told him to stop”.

Mr Vitale said he asked Sa why she was responding as if he was a bad person, but Saitilofia swore at him and was angry about him touching her leg.

The Court heard that Mrs Saitilofia Puipuia then reported the matter to Human Resources and Vitale had written a formal statement to SWA’s HR Manager defending his actions.

Vitale wrote in English to HR, that he was in a blind relationship with Mrs Puipuia because no one knew about it. He also writes that he had a crush on her.

When asked by Prosecutor Lucy Sio-Ofoia what he meant by crush, Vitale replied “it means we are dating.”

In follow up questions Justice Tuatagaloa asked Vitale if he knew what the word crush was and he again replied, “to my understanding crush means a girl and a guy dating.”

Justice Tuatagaloa told the defendant if he had ever looked  up the dictionary for the meaning of the word crush and he said no.

Justice Tuatagaloa again asked the defendant, why he thought the victim would take the matter to court if they were in a relationship. Mr Vitale replied Sa got angry, thinking he had already told “Henry” a co-worker at SWA about their blind relationship.

Vitale told the Court Sa agreed to have a sexual relationship with him on two separate occasions before the alleged incident happened.

The matter continues in Court with final submissions from both counsels today.