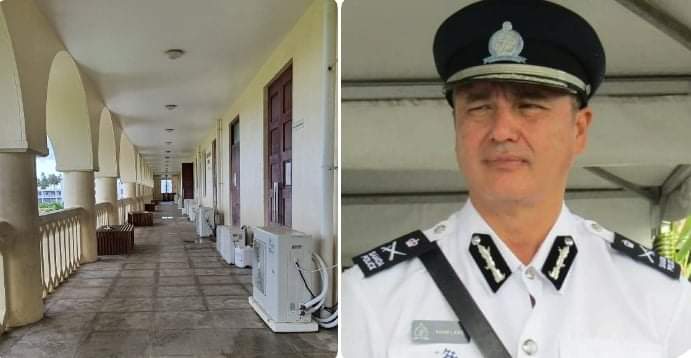 The already tight schedule of the Supreme Court of Samoa was further disrupted this week when Police and Prisons failed to transport defendants ordered to appear in Court, from Tanumalala and Olomanu prisons.

Police Commissioner Su’a Fuiavailiili Egon Keil who says that it was a communication and systems issue “that is being dealt with immediately”; had come under fire Thursday afternoon when three Supreme Court Justices each issued strong warnings against him.

Justice Tafaoimalo Leilani Tuala-Warren was unable to hand down a sentence due to be delivered on the morning of Wednesday 3rd June.

After a second adjournment when the defendant failed to appear again on Thursday, Prosecution informed the Judge that Police were not heeding to requests for prisoners to be brought in.

In response Justice Tafaoimalo, who is also presiding over a child rape case this week, then issued a warning against Police and Correctional Services.

“I make an Order to the Police Commissioner and the Officer in Charge of Corrections to bring the defendant in tomorrow morning at 10am;

“Inform the Police Commissioner that he will be held in contempt of court if the defendant is not brought in according to this Court Order”.

Over in the next courtroom Justice Leiataualesa Daryl Clarke threatened to charge the Police Commissioner with kidnapping for unlawful detention.

Justice Leiataualesa cited S130 of the Crimes Act that refers to the offence carrying a maximum prison term of 10 years.

“The unlawful detention with intent of these defendants, can constitute kidnapping”, said Justice Clarke.

The issue also affected proceedings in the courtroom of Acting Chief Justice Vui Clarence Nelson who had to send out a second order for an accused who failed to appear before him.

“If that order is not obeyed, I’ll be quite happy to take it to the next level but surely it’s not necessary to do that”, said Justice Vui.

The Acting Chief Justice acknowledged that there was an obvious lapse in communication between the Office of the Attorney General and Police, however, Vui also conveyed his concerns that time and resources were being wasted on an issue that he says, “should be easily resolved”.

“if by tomorrow it’s not resolved we will take it the next step and no-one will find that pleasant.”

Contacted for a response the Police Commissioner who was given the task of taking over Samoa’s Prison and Correctional Services just two months ago, gave his assurance that the matter was of the highest priority to him.

“We have been working with OAG and MJCA on this since we took over responsibility of Prisons operations”.

Commissioner Keil says certain steps in the system needed to be better coordinated and processes tightened to ensure safety and security were upheld; especially in situations where requests are not written.

Court dates are set weeks even months in advance, however, Su’a says, “We receive conflicting and at times just verbal instructions by various entities to bring a custody into Court;

“Last hour requests to have prisoners in Court from Tanumalala is unreasonable and dangerous; we want to make sure everyone is safe especially our communities while we do our job;

“If things go wrong with the transportation process, Prison staff will get the blame and someone could get hurt”.

Su’a says there are over 300 individuals at Tanumalala prison and identification can be problematic when prisoners and custodies have similar names, adding that human resources and staffing for them is also an area that needs to be addressed.

“Our people have been going non-stop since the measles and staffing is insufficient..”

The Police Commissioner says he was not in Court yesterday and even unaware that Court was on.

Su’a adds that the believes in the Court System and the Criminal Justice System that consists of Police, Office of the Attorney General and the Courts.

“Police will always be subject to the rule of law and comply with all Orders issued by the Courts”.