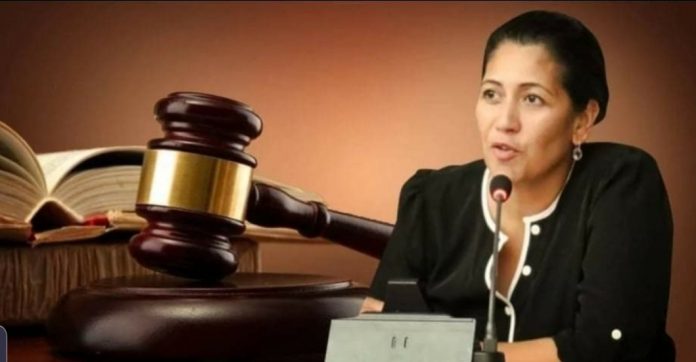 2 August 2020, Mulinuu Samoa. Justice Tafaoimalo Leilani Tuala-Warren issued strong warnings during the sentencing of an 18 year old responsible for the tragic death of Chinese national Mr Cao Ya Qing during an invasion of a business compound in October last year.

Gogosina Lelei Leilua pleaded guilty to murder and has been handed a life sentence, with a minimum 10 years at Tanumalala prison before he is eligible for parole. During sentencing Justice Tafaoimalo said this case was an immeasurable tragedy and called for national action to address the increasing crime rates amongst Samoa’s youth. Tafaoimalo also warned Samoa against growing hostilities towards people of a particular race, or held particular beliefs; stating this would only lead to hate crimes if left unaddressed.

On the Saturday before White Sunday last year, four youth armed with machetes and kitchen knives, entered the Pacific Trader’s compound opposite the LTA at Vaitele. Gogosina Lelei Leilua was with his best friend Tafi, his older brother Mikaele and his brother’s friend, Kome Sioeli.Two more youth were with the group that night but escaped charges because they did not enter the compound.

According to the police summary of facts, Mr Qing and his other Chinese colleagues assaulted Mikaele in an attempt to confront him. Gogosina heard his older brother calling out for help after he was struck by Mr Cao Ya Qing with a machete.

Running to his brother’s aid, Gogosina stabbed Mr Qing on the back between 5 to 10 times.

Gogosina is the third of seven children and his father is the sole breadwinner of the family. His mother told Probation that piror to the offending Gogosina was unemployed and stayed home to carry out household errands.

“He was relied upon to prepare evening meals, maintain their family land, and serve the family Chief”.

Mrs Leilua said her son’s only weakness was hanging out with the wrong crowd and apologised for her son’s crime.

Justice Tafaoimalo identified gang mentality as an emerging threat amongst the increasing number of Samoa’s youth appearing before the Courts.

Said Justice Tafaoimalo during sentencing, “Increasingly.. we are seeing a gang or pack mentality in the commission of crimes by young men in particular. We see young men influenced by their peers to adopt irrational and dangerous behaviours which they would not normally adopt individually”.

“This is a dangerous trend that our country needs to be conscious of. Our many unemployed young men should be in vocational training to avoid idleness, boredom and low financial standing which ultimately in the vast majority of cases leads in only one direction – crime”.

The Supreme Court justice pointed out that, “All the young men who were with the defendant on the material night, were unemployed, and all were between 18 and 22 years old”.

Hostility Can Lead to Hate Crimes

In addition, the Courts issued a strong warning against Samoa becoming a country with hostility towards people of a certain race.

Justice Tafaoimalo said this was particularly poignant at this time, given what is happening around the globe with the race issue.

“If we do not discourage racial biases and preconceptions, racism which translates into crime may very well become a real issue in Samoa and not one that only occurs elsewhere in the world”, warned the Supreme Court Justice.

Tafaoimalo explained that in the affidavit of Jia Lin Shen, 63 years old, dated 14 January 2020, he says that the Chinese are being targeted and he feels that they are vulnerable and can be attacked any time of the night.

“I read this with a heavy heart,” said Justice Tafaoimalo.

“Our country should be careful lest we become a country with hostility towards a group of persons who have race in common”.

Justice Tafaoimalo further warned that if not properly addressed, increasing crime will be born of that hostility, targeted towards a certain group of people.

“And from there, the step towards hate crime is inevitable”.

“Hate crimes are crimes typically involving violence, that are motivated by prejudice on the basis of race, religion, sexual orientation, or other grounds;

“We pride ourselves as a nation of being tolerant and accepting of different races and nationalities, very much in harmony with our Christian beliefs;

“We must guard this tolerance fiercely”, said Justice Tafaoimalo.

When the youth were first arrested in October 2019, Member of Parliament for Urban West Faumuina Leatinuu Wayne Fong came forward to apologise on behalf of the youth of his electorate stating that he believed the incident was not a hate crime but rather a case of youth knowing that Chinese businesses typically keep large sums of money on their premises.

“I encourage all Chinese Companies to please bank their takings daily and avoid holding money in their homes and businesses. It is a risk and a very dangerous one that you take because you are opening yourself to being targeted by thieves,” said Faumuina at the time.

Associate Minister for Communication and Information Technology Lealailepule Rimoni Aiafi was the first to speak out about the incident at the time, stating that a marked breakdown in our cultural practices and traditions has led to such violent crimes.

“So it’s unemployment, lack of education, bad upbringing and being out of touch with the foundations of church and culture,” Lealailepule had said at the time.

During sentencing for Gogosina and the other youths involved in this incident, it was confirmed that Village Councils imposed the usual fines and penalties upon the families of the youth, which had all been served and paid up.